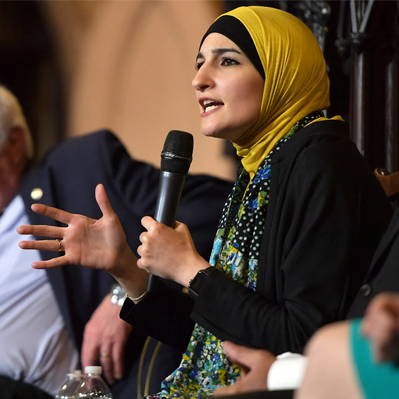 Linda Sarsour is an American political activist. She was co-chair of the 2017 Women's March, the 2017 Day Without a Woman, and the 2019 Women's March. She is also a former executive director of the Arab American Association of New York. She and her Women's March co-chairs were profiled in Time magazine's "100 Most Influential People" in 2017.

A Muslim of Palestinian descent, Sarsour first gained attention for protesting police surveillance of American Muslims, later becoming involved in other civil rights issues such as police brutality, feminism, immigration policy, and mass incarceration. She has also organized Black Lives Matter demonstrations and was the lead plaintiff in a suit challenging the legality of the Trump travel ban.

Her political activism has been praised by some liberals and progressives, while her stance and remarks on the Israeli–Palestinian conflict have been criticized by some conservatives and Jewish leaders and organizations. Sarsour has advocated for Palestinians in the Israeli-occupied territories and expressed criticism of Zionism and support for the Boycott, Divestment, Sanctions (BDS) campaign against Israel. Sarsour, Bob Bland, and Tamika Mallory stepped down from the Women's March organization in September 2019 following a controversy over the organization's handling of accusations of anti-semitism.

Sarsour was born in Brooklyn, New York, the eldest of seven children of Palestinian immigrants. Her father owned a small market in Crown Heights, Brooklyn, called Linda's. She was raised in Sunset Park, Brooklyn, and attended John Jay High School in Park Slope. After high school, she took courses at Kingsborough Community College and Brooklyn College with the goal of becoming an English teacher.

As of 2011, Sarsour lives in Bay Ridge, Brooklyn. At 17, she entered into an arranged marriage, and had three children by her mid-20s. Both Sarsour's family and her husband are from the Palestinian city of Al-Bireh in the West Bank, and about 9 miles (14 km) north of Jerusalem.

Sarsour is a Muslim. On the subject of women in Islam, she told The Washington Post, "There are Muslims and regimes that oppress women, but I believe that my religion is an empowering religion." She chooses to wear a hijab. Sarsour argues that the Islamic religious laws and principles known as sharia do not impose on non-Muslims and that Muslims must also follow civil laws. 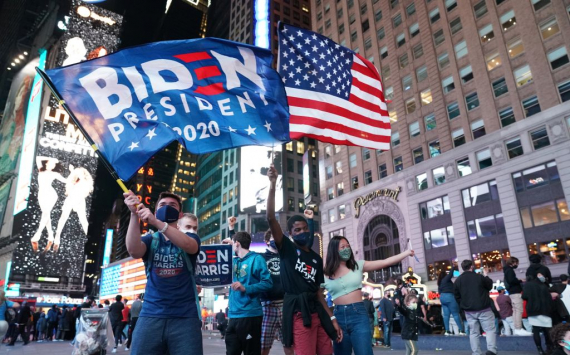 WITKOFF Steven Charles
Real estate investor and landlord based in New York City, and founder of the Witkoff Group
3 place

United States
4 Persons
GlobalNY.biz pays special attention to the activities of famous people: politicians, officials, businessmen, bankers, cultural and sports figures. Their opinion largely determines the development of political, social and economic life in New York. The section is constantly edited by our journalists for the relevance of information. Here you can find information about CEOs and presidents of top New York companies, officials and public figures who play a key role in the development of the region.
The goal of the project is to create a comfortable information space for all market actors, as well as to acquaint the readership with business people in New York.
We have created an impressive database of people in New York, which contains information about a career path, education and other important information about a person.
Thanks to automatic counting of the number of mentions of a person in the news sections " New York News ”and“ New York Press Releases ”on the portal the rating of popularity and influence of persons is formed. The GlobalNY.biz team monitors rating changes and rewards project participants for their success. In general, the rating of participants is based on an in-depth analysis of the activity of PR services of famous people, and also reflects the qualitative state of the information field formed by the media and press services around the organization.
Business People of New York is a project about people who, through their ideas, words and deeds, have a great influence on the development and prosperity of New York.
Alena Potapova
Development Director
Subscribe to the person
Person in rating
All