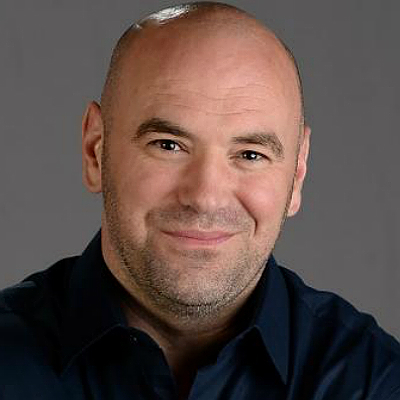 Position: American businessman and the current President of the Ultimate Fighting Championship (UFC)

Dana White was born in Manchester, Connecticut, and spent most of life in Las Vegas, Nevada. White liked boxing and competed as an amateur boxer. He opened some gyms where he created workout programs which combined boxing and aerobics. White attended Bishop Gorman High School in Las Vegas where met and became friends with fellow boxing fan Lorenzo Fertitta. Along with older brother Frank Fertitta III, Lorenzo became a boxing fan from attending events with their father, Frank Fertitta Jr., a successful former casino executive.

At a wedding in 1995, White, who at the time managed boxers and a few Mixed Martial Arts (MMA) fighters, reunited with Lorenzo Fertitta. It was how Fertitta first heard about the sport named MMA. By then, Lorenzo and older brother Frank had taken over casino operations from their father, and created additional casinos throughout Nevada under the brand Station Casinos. White took replaced Sal Garcia as manager of MMA fighters Chuck Liddell and Tito Ortiz, friends and trainers partners whom would compete in one of the first major MMA promotions: Ultimate Fighting Championship (2000).

White made an agreement with International Fighting Championships (IFC) to sell sponsorship on their behalf. He also got a fight for Liddell against Steve Heath at an IFC event on June 11, 2000. During the following November, UFC owner Robert B. Meyrowitz, suffering financially, had conversations with Lorenzo Fertitta about buying his company. Exactly how the idea came about is in question. White said he had brought up the idea with Fertitta, believing UFC was for sale. Meyrowitz-who later told author Clyde Gentry that he had not actively put the company up for sale-agreed to sell. According to Gentry, Fertitta stated that White had heard of Meyrowtiz's intentions from his brother, David Meyrowitz. Zuffa LLC was formed by Lorenzo and older brother Frank Fertitta III in January 2001, with them being equal majority owners. Lorenzo became Chairman/Chief Executive Officer, while White was given ten percent equity and the title of President. Zuffa bought UFC for $2 million on January 9, 2001. White stopped managing Ortiz and Liddell as a result of his new executive role in UFC. UFC's new owners were pivotal in lobbying different athletic jurisdictions to legalize the sport.

Three years after Zuffa acquired UFC, the promotion had a deficit in the $30 million plus range. Majority owners Lorenzo Fertitta and Frank Fertitta III decided that an increased television presence would turn the company profitable. The Ultimate Fighter was created, and Zuffa paid Spike TV $10 million for airtime. The show was produced between September and October 2004, and aired in 2005. It became a ratings success for Spike TV. During the first live finale of The Ultimate Fighter, a light-heavyweight fight between Forrest Griffin and Stephan Bonnar drew many viewers. Griffin won the judge's decision to become the competition's first winner and earned a UFC contract. Bonnar received a UFC contract although for his performance.The bout is credited for influencing Spike TV President 'Kevin Kay' (I) to not only renew the series, but pay Zuffa millions of dollars for the rights to air it over subsequent years.

Dana White became the public managerial face of UFC from interviews, leading press conferences, and supervising fighters facing off. The success of The Ultimate Fighter helped grow UFC, and increased White's profile. He became known as an aggressive, outspoken competitor who harshly criticized his own fighters and rivals, sometimes accompanied by profanity. When Affliction owner Tom Atencio decided to start a fight promotion, White banned Affliction from sponsoring UFC events. On the night of July 19, 2008, when Affliction held its first fight card, a Pay-Per-View named Affliction: Banned (2008), White counter-programmed with UFC: Silva vs. Irvin (2008). Vice President of Japan's Pride Fighting Championships (2006), Jerry Millen, was a detractor of White. While Millen was a guest on Scott Ferrall's Sirius XM radio program, White called in and had harsh words with Millen. Millen interviewed White's mother, June White, who wrote a book critical of her son. White once called Showtime Sports General Manager, Ken Hershman, an idiot. For years White and former client Tito Ortiz would go after each other in the media during and after Ortiz's time in UFC. The same went for former UFC heavyweight champion Josh Barnett, who has failed drug tests. White had top-ranked welterweight Jon Fitch released from his contract after Fitch refused to sign away the lifetime rights to his image for a UFC video game. Fitch complained that it was a power move by White because Fitch refused to sign away those rights for inadequate compensation. White said it had something to do with the "idiots" in charge of the gym in which Fitch trained, American Kickboxing Academy (AKA). Within a day an agreement was reached and Fitch was back under UFC contract. White had been complementary of Strikeforce (2009) CEO Scott Coker until Coker was able to sign Fedor Emelianenko to a contract. Emelianenko on various occasions had negotiated with UFC, but could not settle on terms. White had repeatedly stated that Emelinanenko had not fought high-level opponents when he dominated as heavyweight champion of Pride Fighting Championships. White dismissed Strikeforce as "Strike-Farce" and "bush league". In June 2010, there were reports that clothing company TapOut, which sponsored many UFC fighters, canceled a sponsorship deal with Strikeforce fighter Fedor Emelianenko as a result of UFC pressure. White confirmed this when asked by journalist Ariel Helwani, saying that it was the price of competing against UFC. When Zuffa acquired Strikeforce in March 2011, Coker was kept in Strikeforce with a 3-year contract. For many years under Zuffa ownership, White said women would never fight in the UFC because not enough compete in MMA to support a division. When Zuffa bought Strikeforce (2009) in March 2011, women's bouts continued. With her easy dominance of the bantamweight division, and growing popularity outside MMA, Strikeforce bantamweight champion Ronda Rousey lead White to change his mind as a result of Rousey's increasing popularity inside and outside of MMA. In 2012, Rousey became the first woman given a Zuffa contract to compete in UFC. White awarded Rousey the UFC women's bantamweight title, booked her to defend it against Liz Carmouche in the promotion's first women's bout at UFC 134. In 2013, retired former UFC heavyweight and light-heavyweight champion Randy Couture signed a deal with Viacom to be a coach on Fight Master: Bellator MMA (2013). Viacom owned rival promotion Bellator MMA. White banned Couture from cornering his son Ryan Couture at UFC events.Bellator Fighting Championships (2009) had established itself as major promotion under the tournaments created by Bjorn Rebney. Tensions between White and Rebney reached its highest in 2013 when free agent Eddie Alvarez was given permission by Bellator to negotiate with UFC. When UFC made Alvarez an offer, Rebney said Bellator matched it. Alvarez disputed this, which lead to a legal case. The case was settled with Alvarez re-signing with Bellator. A few months after his contract with Zuffa expired in 2014 Scott Coker was hired to replace Rebney at Bellator. Coker allowed Alvarez an early release from his contract to sign with UFC.

In 2014, UFC reached an agreement with Reebok for them to be the exclusive sponsor of UFC fighter attire during competition and select promotional appearances. Fighters complained that they would lose money without their own sponsors. Others fighters liked the idea because it meant they would spend less time trying to find sponsors before they compete. When UFC cut-man Jacob Duran said in an interview that the deal would cost him a lot of money because he could not have his own sponsors, White ended his employment with UFC.

White has been criticized for his actions when it comes to the press. Loretta Hunt and Josh Gross were prohibited from getting UFC press credentials after writing stories White did not like. In an online video, White went on a profanity-laced diatribe against Hunt and her story citing a source which claimed that managers had been banned by UFC. Ken Pavia turned out to the Hunt's source. Pavia had been an agent to many UFC fighters. Zuffa sued Pavia for theft of secrets, alleging he illegally shared confidential UFC documents with Bjorn Rebney, who was named as a co-defendant in the suit. A few weeks later Bellator sued Zuffa for putting Jonathan Brookins on the The Ultimate Fighter because they claimed he was under contract to them. Journalist Ariel Helwani reported that White had him escorted from the arena during UFC 199 and banned from receiving future UFC press credentials. White and company were upset that Helwani reported that Brock Lesnar would be returning to UFC, despite their request not to. White actions resulted in criticisms from some in the media and some fans. The ban was ended a few days later.

White's harsh comments and those of some UFC fighters have been used by Culinary Union Local 226 in its anti-MMA efforts in New York, a state which banned professional MMA in 1997. The Culinary Union wanted workers in Station Casinos operated by UFC's then majority owners, the Fertitta brothers, to be unionized. When that did not happen, the group worked against Zuffa's cause in New York. Zuffa for years spent many millions of dollars in political contributions and lobbying efforts for New York to legalize professional MMA. In November 2011, Zuffa took New York State to federal court in a case that was entirely dismissed in 2015. Months after the dismissal, Zuffa filed another lawsuit, but in early 2016 New York made professional MMA legal. On July 11, 2016, Lorenzo Fertitta confirmed months of reports that UFC had been sold. In a television interview, Fertitta said the majority of UFC would be owned by William Morris Endeavor-International Management Group (WME-IMG). WME-IMG reportedly outbid other companies with a $4 billion offer to Zuffa. The Fertitta brothers would become minority owners, while Dana White retained the title of President and his minority ownership.