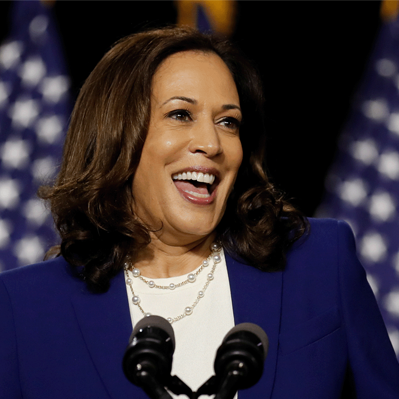 Vice President–elect of the United States

Kamala Devi Harris is an American politician and attorney who is the current junior United States senator from California, and the Vice President–elect of the United States.

Harris was born in Oakland, California, on October 20, 1964. Her mother, Shyamala Gopalan, a biologist whose work on the progesterone receptor gene stimulated advances in breast cancer research, had arrived in the U.S. from Tamil Nadu in India in 1958 as a 19-year-old graduate student in nutrition and endocrinology at the University of California, Berkeley; Gopalan received her PhD in 1964. Her father, Donald J. Harris, is a Stanford University professor emeritus of economics, who arrived in the U.S. from British Jamaica in 1961 for graduate study at UC Berkeley, receiving a PhD in economics in 1966. Along with her younger sister, Maya, Harris lived in Berkeley, California, briefly on Milvia Street in central Berkeley, then a duplex on Bancroft Way in West Berkeley, an area often called "the flatlands" with a significant black population.

When Harris began kindergarten, she was bused as part of Berkeley's comprehensive desegregation program to Thousand Oaks Elementary School, a public school in a more prosperous neighborhood in northern Berkeley which previously had been 95 percent white, and after the desegregation plan went into effect became 40 percent Black. A neighbor regularly took the Harris girls to an African American church in Oakland where they sang in the children's choir. Their mother introduced them to Hinduism and took them to a nearby Hindu temple, where she occasionally sang. As children, she and her sister visited their mother's family in Madras (now Chennai) several times. She says she has been strongly influenced by her maternal grandfather P. V. Gopalan, a retired Indian civil servant whose progressive views on democracy and women's rights impressed her. Harris has remained in touch with her Indian aunts and uncles throughout her adult life. Harris has also visited her father's family in Jamaica.

Her parents divorced when she was seven. Harris has said that when she and her sister visited their father in Palo Alto on weekends, other children in the neighborhood were not allowed to play with them because they were black. When she was twelve, Harris and her sister moved with their mother to Montreal, Quebec, Canada, where Shyamala had accepted a research and teaching position at the McGill University-affiliated Jewish General Hospital. She attended a French-speaking primary school, Notre-Dame-des-Neiges, and then Westmount High School in Westmount, Quebec, graduating in 1981. Wanda Kagan, a high school friend of Harris, later told CBC News in 2020 that Harris was her best friend and described how she confided in Harris that she had been molested by her stepfather. She said that Harris told her mother, who then insisted Kagan come to live with them for the remainder of her final year of high school. Kagan said Harris had recently told her that their friendship, and playing a role in countering Kagan's exploitation, helped form the commitment Harris felt in protecting women and children as a prosecutor. After high school, in 1982, Harris attended Howard University, a historically black university in Washington, D.C. While at Howard, she interned as a mailroom clerk for California senator Alan Cranston, chaired the economics society, led the debate team, and joined Alpha Kappa Alpha sorority. Harris graduated from Howard in 1986 with a degree in political science and economics.

Harris then returned to California to attend law school at the University of California, Hastings College of the Law through its Legal Education Opportunity Program (LEOP). While at UC Hastings, she served as president of its chapter of the Black Law Students Association. She graduated with a Juris Doctor in 1989 and was admitted to the California Bar in June 1990.

In 1990, Harris was hired as a deputy district attorney in Alameda County, California, where she was described as "an able prosecutor on the way up". In 1994, Speaker of the California Assembly Willie Brown, who was dating Harris at the time, appointed her to the state Unemployment Insurance Appeals Board and later to the California Medical Assistance Commission. Harris took a six-month leave of absence in 1994 from her duties as prosecutor, then afterward resumed as prosecutor during the years she sat on the boards. Harris's connection to Brown was noted in media reportage as part of a pattern of Californian political leaders appointing "friends and loyal political soldiers" to lucrative positions on the commissions. Harris has defended her work.

In February 1998, San Francisco district attorney Terence Hallinan recruited Harris as an assistant district attorney. There, she became the chief of the Career Criminal Division, supervising five other attorneys, where she prosecuted homicide, burglary, robbery, and sexual assault cases – particularly three-strikes cases. In 2000, Harris reportedly clashed with Hallinan's assistant, Darrell Salomon, over Proposition 21, which granted prosecutors the option of trying juvenile defendants in Superior Court rather than juvenile courts. Harris campaigned against the measure, which passed. Salomon opposed directing media inquiries about Prop 21 to Harris and reassigned her, a de facto demotion. Harris filed a complaint against Salomon and quit.

Harris married attorney Douglas Emhoff, who was at one time partner-in-charge at Venable LLP's Los Angeles office, on August 22, 2014, in Santa Barbara, California. Harris is a stepmother to Emhoff's two children from his previous marriage to the film producer Kerstin Emhoff. As of August 2019, Harris and her husband had an estimated net worth of $5.8 million. In 2001, she briefly dated Montel Williams, the former host of The Montel Williams Show.

Harris is a multiracial American and a Baptist, holding membership of the Third Baptist Church of San Francisco, a congregation of the American Baptist Churches USA. Her sister, Maya, is a lawyer and MSNBC political analyst; her brother-in-law, Tony West, is general counsel of Uber and a former United States Department of Justice senior official. Her niece, Meena, is the founder of the Phenomenal Women Action Campaign and former head of strategy and leadership at Uber. 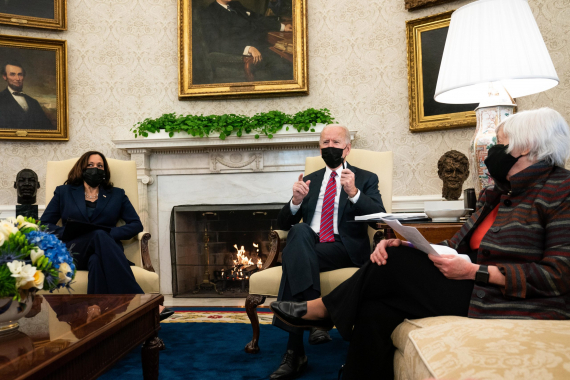 Janet L. Yellen and Kamala Harris to Announce $8.7 billion in Investments for a More Equitable Economy at 2021 Freedman’s Bank Forum
Politics and Administration
1939
View all