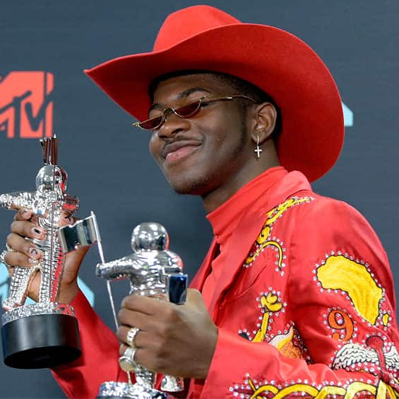 is an American rapper and singer-songwriter. He rose to prominence with the release of his country rap single "Old Town Road", which first achieved viral popularity in early 2019 before climbing music charts internationally and becoming diamond certified by November of that same year.

"Old Town Road" spent 19 weeks atop the US Billboard Hot 100 chart, becoming the longest-running number-one song since the chart debuted in 1958. Several remixes of the song were released, the most popular of which featured country singer Billy Ray Cyrus. Lil Nas X came out as gay while "Old Town Road" was atop the Hot 100, becoming the only artist to do so while having a number-one record.

Following the success of "Old Town Road", Lil Nas X released his debut extended play, titled 7, which spawned two further singles⁠, with "Panini" peaking at number five and "Rodeo" peaking at number 22 on the Hot 100. His forthcoming debut studio album, Montero, is preceded by the chart-topping single "Montero (Call Me by Your Name)", and the singles "Sun Goes Down" and "Industry Baby".

Lil Nas X was the most-nominated male artist at the 62nd Annual Grammy Awards, where he ultimately won awards for Best Music Video and Best Pop Duo/Group Performance. "Old Town Road" earned him two MTV Video Music Awards including Song of the Year, and the American Music Award for Favorite Rap/Hip Hop Song; Lil Nas X is also the first openly LGBTQ Black artist to win a Country Music Association award. Time named him as one of the 25 most influential people on the Internet in 2019, and he was named on the Forbes 30 Under 30 list in 2020.

Montero Lamar Hill was born in Lithia Springs, Georgia, a small city outside Atlanta, on April 9, 1999. He was named after the Mitsubishi Montero. His parents divorced when he was six, and he settled in the Bankhead Courts housing project with his mother and grandmother. Three years later, he moved in with his father, a gospel singer,[ north of the city in Austell, Georgia. Although initially reluctant to leave, he later regarded it as an important decision: "There's so much shit going on in Atlanta—if I would have stayed there, I would have fallen in with the wrong crowd." He started "using the Internet heavily right around the time when memes started to become their own form of entertainment"; about when he was thirteen.

He spent much of his teenage years alone, and turned to the Internet, "particularly Twitter, creating memes that showed his disarming wit and pop-culture savvy." His teenage years also saw him struggling with his coming out to himself as being gay; he prayed that it was just a phase, but around sixteen or seventeen he came to accept it. He began playing trumpet in the fourth grade and was first chair by his junior high years, but quit out of fear of looking uncool.

He attended Lithia Springs High School, from which he graduated in 2017. He then enrolled at the University of West Georgia, where he majored in computer science but later dropped out after one year to pursue a musical career. During this time, he stayed with his sister and supported himself with jobs at Zaxby's restaurants and the Six Flags Over Georgia theme park. In September 2019 he revisited his high school to perform a surprise concert.