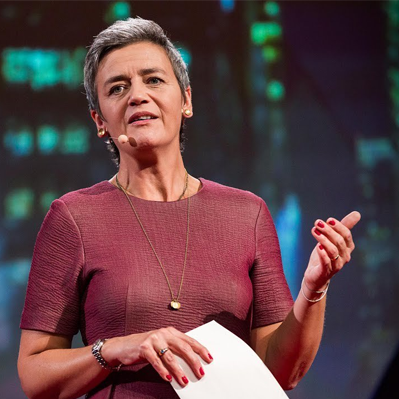 Position: Executive Vice President of the European Commission for A Europe Fit for the Digital Age

Vestager was a member of the Folketing from 20 November 2001 until 2 September 2014, representing the Danish Social Liberal Party (Radikale Venstre). She was the political leader of her party from 2007 to 2014, and served as Minister of Economic Affairs and the Interior from 2011 to 2014. She has been described as "the rich world’s most powerful trustbuster".

Vestager was born in Glostrup, Zealand, a daughter of Lutheran ministers Hans Vestager and Bodil Tybjerg. She matriculated from Varde Upper Secondary school in 1986. She studied at the University of Copenhagen, graduating in 1993 with a degree in Economics. Vestager speaks Danish, English and some French.

Vestager has been a professional politician since the age of 21, when she was appointed to the central board and executive committee of the SLP and its European Affairs Committee, and shortly afterwards as National Chairwoman of the Party.

In 2001, Vestager was elected to the Danish Parliament, becoming Chairwoman of its Parliamentary Group in 2007. She was appointed Minister of Education and Ecclesiastical Affairs in 1998.

On 15 June 2007 Vestager secured election as her Party's parliamentary group leader in the Folketing, replacing Marianne Jelved. When Denmark's Prime Minister Lars Løkke Rasmussen called an early election in 2011 after failing to secure majority lawmaker backing for his economic stimulus package, Vestager's Social Liberals and the Conservative People's Party formed a political alliance, pledging to work together no matter which political bloc would win the election.

Vestager's husband is a gymnasium maths-and-philosophy teacher. They have three daughters, Maria, Rebecca, and Ella. Vestager served as an inspiration for the main character in Borgen, who tries to juggle family life and politics.