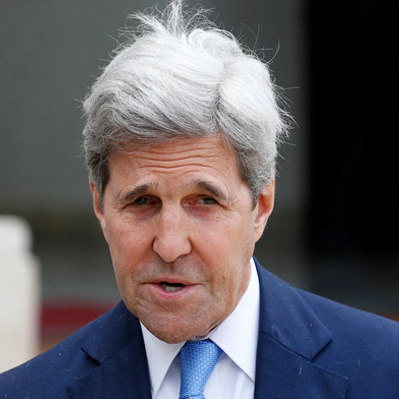 John Forbes Kerry is an American politician and diplomat who served as the 68th United States Secretary of State from 2013 to 2017. An attorney and former naval officer, Kerry first drew public attention as a decorated Vietnam veteran turned anti-war activist. He went on to serve as a prosecutor and as Lieutenant Governor of Massachusetts, before serving as United States Senator from Massachusetts from 1985 to 2013. A member of the Democratic Party, he was the Democratic nominee for President of the United States in the 2004 election, which he lost to incumbent President George W. Bush.

John Forbes Kerry was born on December 11, 1943, at Fitzsimons Army Medical Center in Aurora, Colorado. He is the second of four children born to Richard John Kerry, a Foreign Service officer and lawyer, and Rosemary Forbes, a nurse and social activist. His father was raised Catholic (John's paternal grandparents were Austro-Hungarian Jewish immigrants who converted to Catholicism) and his mother was Episcopalian. He was raised with an elder sister named Margaret, a younger sister named Diana, and a younger brother named Cameron. The children were raised in their father's Catholic faith, and John served as an altar boy.

Kerry was originally a military brat, until his father was discharged from the Army Air Corps. Kerry lived in Groton, Massachusetts in his first year and Millis, Massachusetts afterwards before moving to the Georgetown neighborhood of Washington, D.C. at age seven, when his father took a spot in the Department of the Navy's Office of General Counsel and soon became a diplomat in the State Department's Bureau of United Nations Affairs.

His maternal extended family enjoyed great wealth as members of the Forbes and Dudley–Winthrop families. Kerry's parents themselves were upper-middle class, and a wealthy great-aunt paid for him to attend elite boarding schools such as Institut Montana Zugerberg in Switzerland. Through his maternal ancestry, Kerry also descends from Rev. James McGregor who was among the first 500 Scots-Irish immigrants to Boston Harbor in the 18th century.

In 1957, his father was stationed at the U.S. Embassy in Oslo, Norway, and Kerry was sent back to the United States to attend boarding school. He first attended the Fessenden School in Newton, Massachusetts, and later St. Paul's School in Concord, New Hampshire, where he learned skills in public speaking and began developing an interest in politics. Kerry founded the John Winant Society at St. Paul's to debate the issues of the day; the Society still exists there. In 1960, while at St. Paul's, he played bass in a minor rock band called The Electras with six of his classmates. They had about five hundred copies of one album printed in 1961, which they sold some of at dances at the school; it was made available on streaming platforms many years later.

A young John Kerry (in white) aboard the yacht of John F. Kennedy, in 1962
In 1962, Kerry entered Yale University, majoring in political science and residing in Jonathan Edwards College. By that year, his parents returned to Groton. While at Yale, Kerry briefly dated Janet Auchincloss, the younger half-sister of First Lady Jacqueline Kennedy. Through Auchincloss, Kerry was invited to a day of sailing with then-President John F. Kennedy and his family.

Kerry played on the varsity Yale Bulldogs Men's soccer team, earning his only letter in his senior year. He also played freshman and JV hockey and, in his senior year, JV lacrosse. In addition, he was a member of the Psi Upsilon fraternity and took flying lessons.

In his sophomore year, Kerry became the Chairman of the Liberal Party of the Yale Political Union, and a year later he served as President of the Union. Amongst his influential teachers in this period was Professor H. Bradford Westerfield, who was himself a former President of the Political Union. His involvement with the Political Union gave him an opportunity to be involved with important issues of the day, such as the civil rights movement and the New Frontier program. He also became a member of Skull and Bones Society, and traveled to Switzerland through AIESEC Yale.

Under the guidance of the speaking coach and history professor Rollin G. Osterweis, Kerry won many debates against other college students from across the nation. In March 1965, as the Vietnam War escalated, he won the Ten Eyck prize as the best orator in the junior class for a speech that was critical of U.S. foreign policy. In the speech he said, "It is the spectre of Western imperialism that causes more fear among Africans and Asians than communism and thus, it is self-defeating."

Kerry graduated from Yale with a Bachelor of Arts degree in 1966. Overall, he had lackluster grades, graduating with a cumulative average of 76 over his four years. His freshman-year average was a 71, but he improved to an 81 average for his senior year. He never received an "A" during his time at Yale; his highest grade was an 89.

Biden presented candidates for key positions in diplomacy and security
I share Biden's view of the need to go back to the Paris Climate Agreement, but that agreement alone is not enough
View all