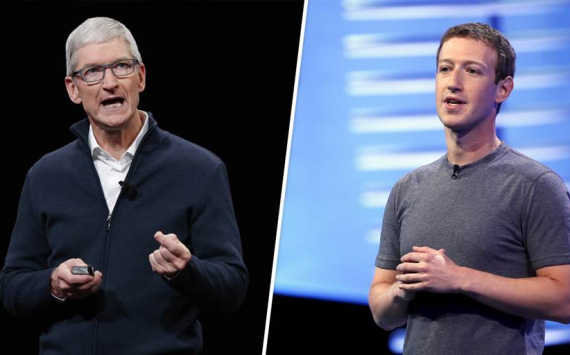 Conflict between the companies

Relations between Apple and Facebook have heated up over the past month as the social network is very unhappy with the new privacy rules that Apple plans to introduce starting with iOS 14.5 operating system.

Starting with this version of the OS, all apps must warn the user that they are collecting their data. If the user refuses to collect the data, the owner of the app, not excluding Facebook, will not be able to use it for targeting ads. Quite simply, the ability to trade user data is dramatically reduced, and this undermines the established business models of IT giants with a huge customer base.

Earlier, the CEOs of Apple and Facebook exchanged mutual grievances. The head of Apple Tim Cook criticized the social network for collecting user data and technology that increases the flow of misinformation. In turn, Mark Zuckerberg accused Apple of violating competition.

"In a time of total disinformation and conspiracy theories fueled by algorithms, we can no longer turn a blind eye to the technology theory that says any interaction is good interaction, the longer the better, and all with the aim of collecting as much data as possible", Tim Cook said.

"It's time to stop pretending that this approach doesn't have its price the loss of trust, polarisation and violence. The social dilemma cannot be allowed to turn into a social catastrophe", the Apple CEO said.

For his part, Mark Zuckerberg pointed to unfair competition from the messenger iMessage: "iMessage is the backbone of the Apple ecosystem. It's often used simply because it's installed on all of the company's devices". Zuckerberg believes that iMessage enjoys preferential treatment from Apple, which in turn regularly interferes with the software in order to promote its own apps.

This was immediately followed by fears that the Facebook app would disappear from the App Store.