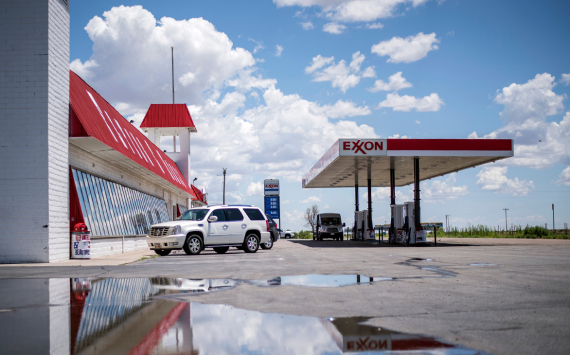 ExxonMobil will benefit from...
Subscribe to Newsletter
Main
News
Business

ExxonMobil will benefit from increased production of cheap oil

ExxonMobil can reduce its huge debt and boost revenues and profits by ramping up production of cheap oil offshore Stabroek Block in the Guyana-Suriname basin. The production price of Brent crude from one of the fields: $35 a barrel versus current market levels of around $55.

Exxon Mobil (XOM) shares, which have lost almost 35% in the past 12 months, rose 10.3% in the past week on the back of OPEC+'s decision to reduce overall oil production thanks to a voluntary cut by Saudi Arabia. The price of Brent crude rose on the news last week to $55.22 a barrel as of the close of trading on Friday.

Meanwhile, Exxon Mobil has an opportunity to reduce its huge debt and increase revenues and profits by ramping up production of cheap oil at $35 a barrel or lower.

The Stabroek Block offshore fields in the Guyana-Suriname Basin are 45% owned by Exxon and in addition to the established production in 18 fields, the company has started drilling the new Bulletwood-1 well. According to reports from the Guyana Department of Maritime Administration, drilling in the area is expected to be completed by 23 February, and the Bulletwood-1 well has a potential reserve of 500 million barrels of oil. Exxon is producing crude oil from the Liza field in this shelf with an injection capacity of 120,000 barrels per day at a price of $35 a barrel. Part of the revenue from this production and refining is owned by partners: 30% by US oil and gas company Hess and 25% by China's leading state oil company CNOOC.

Liza's production ramp-up will begin in 2022, when a second floating production, storage and offloading (FPSO) rig comes on stream, allowing it to pump oil at an even lower price of around $25 a barrel.

Exxon also announced in December 2020 that it had discovered significant potential for the Sloanea-1 exploration well offshore Suriname with partner national oil company Petronas. ExxonMobil previously said that it would reduce its domestic and international dry natural gas assets and focus its future capital priorities on high-potential assets.

As production from these fields begins and grows, Exxon will gain new revenue and profit streams.