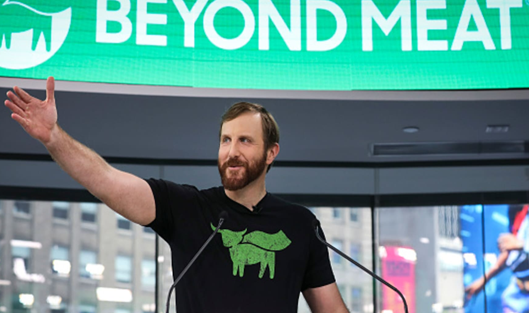 The Beyond Meat report did n...
Subscribe to Newsletter
Main
News
Business

The Beyond Meat report did not meet expectations

The result disappointed investors and McDonald's (MCD), the world's largest fast-food chain, announced the launch of the McPlant vegetarian menu and did not name Beyond Meat as its supplier. The companies had previously partnered to test Beyond Meat products in several McDonald's restaurants in Canada.

Beyond Meat shares, which have increased by 99% since the beginning of the year, fell by 22.4% on Monday after the close of trading. Beyond Meat shares on the NASDAQ stock exchange were stopped several times due to a sharp drop to -33.77% in trading.

A producer of vegetarian burgers reported a third quarter loss of -$0.28 per share on Monday, which was worse than analysts expected at $0.05 per share and well below previous quarters and $0.06 in the third quarter of 2019. The company also reported quarterly losses of $19.3 million compared to a profit of $4.1 million the year before. In addition, the company reported an increase in revenue of 3% (compared to last year) to $94.4 million, but was below the numbers in the previous three quarters, as well as below the average analytical forecast of 132.8 million.

In a comment to the report, Beyond Meat's management reported a drop in sales in the restaurant and catering segment (the most profitable): in the USA, the drop was 11% and in international markets, the drop was 65% (compared to last year's value). Analysts have previously pointed out that Beyond Meat profits are dependent on this segment, as consumers tend to try something new in cafes and restaurants.

Sales of semi-finished Beyond Meat products in US shops increased by 40.5 percent in the third quarter, but total overseas revenue fell by 45 percent.

The CEO of Beyond Meat Ethan Brown said:"The results are explained by the fact that last year customers who were frightened by the pandemic stocked up and then changed their behaviour in the reporting quarter".

However, despite the poor performance, Beyond Meat has no plans to abandon its expansion plans.