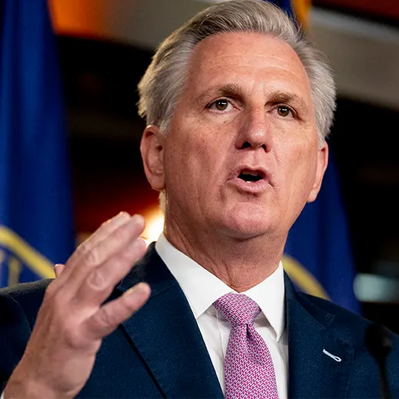 House Minority Leader in the United States House of Representatives

Kevin Owen McCarthy is an American politician serving as House Minority Leader in the United States House of Representatives since 2019. A member of the Republican Party, he served as House Majority Leader under Speakers John Boehner and Paul Ryan from 2014 to 2019. He was the U.S. Representative for California's 22nd congressional district from 2007 to 2013 and has served in the 23rd district since 2013 after redistricting.

McCarthy formerly chaired the California Young Republicans and the Young Republican National Federation. He was a representative in the California State Assembly from 2002 to 2006, the last two years as minority leader. He was elected to Congress in 2006. McCarthy was elected to House leadership in his second term as Republican Chief Deputy Whip from 2009 to 2011. When Republicans took control of the House in 2011, he became majority whip from 2011 until August 2014, when he was elected majority leader to replace the outgoing Eric Cantor, who was defeated in his primary election.

After Republicans lost their majority in the 2018 midterm elections, and Speaker Paul Ryan retired, McCarthy was elected minority leader in January 2019, making him the first California Republican to hold the post. As majority leader he was second-in-command to the Speaker; as minority leader, he is the leader of the House Republicans.

McCarthy was a steady defender of President Donald Trump for the majority of his time as majority leader and minority leader. After Joe Biden won the 2020 presidential election, McCarthy supported Trump's position by falsely denying Biden’s victory and participating in efforts to overturn the results.

McCarthy was born on January 26, 1965, in Bakersfield, California, the son of Roberta Darlene (née Palladino), a homemaker, and Owen McCarthy, an assistant city fire chief. McCarthy is a fourth-generation resident of Kern County. His maternal grandfather was an Italian immigrant, and his paternal grandfather was Irish. McCarthy is the first Republican in his immediate family, as his parents were members of the Democratic Party. He attended California State University, Bakersfield, where he obtained a Bachelor of Science in marketing in 1989 and a Master of Business Administration in 1994.

McCarthy served on the staff of Congressman Bill Thomas from 1987 to 2002. In 1995, he chaired the California Young Republicans. From 1999 to 2001, he chaired the Young Republican National Federation. From the late 1990s until 2000, he was Thomas's district director. McCarthy won his first election in 2000, as a Kern Community College District trustee.

MILLER Carol
Member of the U.S. House of Representatives
13 place