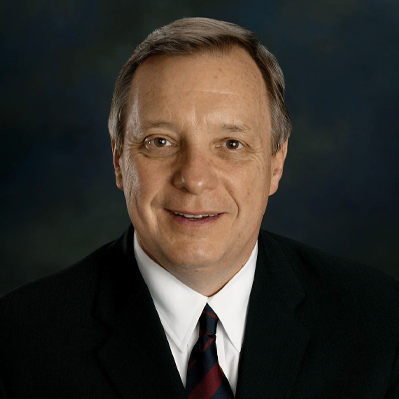 Richard Joseph Durbin is an American politician and lawyer serving as the senior United States senator from Illinois. Now in his fifth Senate term, Durbin has held his seat since 1997.

Durbin has been Senate Democratic whip since 2005, the second-highest position in the Democratic leadership in the Senate, and Senate majority whip since 2021. He chairs the Senate Judiciary Committee. Durbin led the Ketanji Brown Jackson Supreme Court nomination hearings.

Durbin was born in East St. Louis, Illinois. He graduated from the School of Foreign Service and Georgetown University Law Center. Working in state legal counsel throughout the 1970s, he made an unsuccessful run for lieutenant governor of Illinois in 1978. Durbin was elected to the U.S. House of Representatives in 1982, representing the Springfield-based 20th congressional district.

Durbin was born in East St. Louis, Illinois, to an Irish-American father, William Durbin, and a Lithuanian-born mother, Anna (née Kutkin; Lithuanian: Ona Kutkaitė).[3] He graduated from Assumption High School in East St. Louis in 1962. During his high school years he worked at a meatpacking plant. He earned a B.S. from the School of Foreign Service at Georgetown University in 1966. Durbin interned in Senator Paul Douglas's office during his senior year in college, and worked on Douglas's unsuccessful 1966 reelection campaign. Durbin adopted the nickname "Dick", which he did not previously use, after Douglas mistakenly called him by that name.

Durbin earned his J.D. from Georgetown University Law Center in 1969 and was admitted to the Illinois bar later that year. After graduating from law school, Durbin started a law practice in Springfield. He was legal counsel to Lieutenant Governor Paul Simon from 1969 to 1972, and then legal counsel to the Illinois State Senate Judiciary Committee from 1972 to 1982. Durbin was an unsuccessful Democratic candidate for the Illinois State Senate in 1976. He ran for lieutenant governor in 1978 as the running mate of State Superintendent of Schools Michael Bakalis. They were defeated by Republican incumbents Jim Thompson and Dave O'Neal. Durbin then worked as an adjunct professor at the Southern Illinois University School of Medicine for five years while maintaining his law practice.

In 1982, Durbin won the Democratic nomination for the now-eliminated 20th congressional district, which included Macon and most of Springfield. He scored a 1,400-vote victory, defeating 22-year incumbent Paul Findley, a U.S. Navy veteran, whose district lines had been substantially redrawn to remove rural farms and add economically depressed Macon, replacing 35% of the voters and including more Democrats as part of the decennial redistricting. Durbin's campaign emphasized unemployment and financial difficulties facing farmers, and told voters that electing him would send "a message to Washington and to President Reagan that our economic policies are not working." Durbin benefited from donations by pro-Israel groups, especially AIPAC, that opposed Findley's advocacy on behalf of the Palestine Liberation Organization in the year before the election. Durbin was reelected six times, rarely facing serious opposition, and winning more than 55% of the vote in each election except 1994.

MILLER Carol
Member of the U.S. House of Representatives
12 place