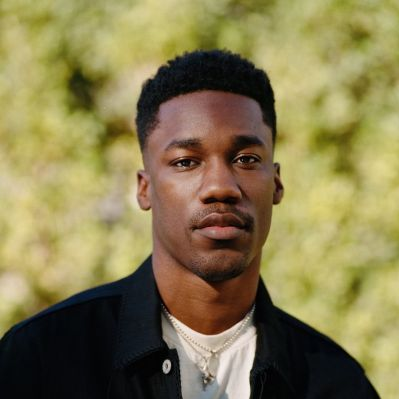 Giveon Dezmann Evans is an American R&B singer and songwriter. He rose to prominence with his feature on Drake's 2020 single "Chicago Freestyle".

That same year, Giveon released the EPs, Take Time and When It's All Said and Done, the former being nominated for a Grammy Award for Best R&B Album, and the latter reaching the Top 10 on the US Top R&B Albums chart. He released "Heartbreak Anniversary", as the second single from Take Time, which reached the Top 40 in the US and was certified Platinum by RIAA. In 2021, Giveon was featured on the Justin Bieber single "Peaches", which debuted at number one on the Billboard Global 200 and US Billboard Hot 100 charts.

Evans was born on February 21, 1995, in Los Angeles County (likely in the city of Long Beach, California). One of three brothers raised by a single mother, he realized his passion for music at a young age, often singing at birthday parties. He credits his mother with pushing him to explore this early love for musicianship. He attended Long Beach Polytechnic High School and took a music education program at the Grammy Museum at age 18, where he fell in love with Frank Sinatra, whose bellowing voice was inspiring to the teenager.

eon self-released his debut single "Garden Kisses" in August 2018. In November 2019, he released the single "Like I Want You" shortly before serving as an opening act for Snoh Aalegra on her Ugh, A Mini Tour Again of Europe and North America.

In February 2020, Evans was featured on Drake's single "Chicago Freestyle", which was only uploaded to SoundCloud and YouTube at the time. In March 2020, Evans released his debut EP, Take Time, under Epic Records and Not So Fast. The EP topped Billboard's Heatseekers Albums chart, earning Giveon his first charting project. Take Time also received acclaim from contemporary music critics who called it "breathtaking" and "polished". In May 2020, "Chicago Freestyle" was released for streaming, along with Drake's mixtape Dark Lane Demo Tapes. The song peaked at number 14 on the Billboard Hot 100, earning Giveon his first Billboard-charting single. It additionally became a top 40 single in the United Kingdom, Canada, New Zealand and Switzerland. In September 2020, Giveon announced the release of his four-track second EP When It's All Said and Done, and shortly released its lead single "Stuck on You". After being released on October 2, 2020, the EP debuted at number 93 on the Billboard 200. With a rapid increase of mainstream attention, Giveon's singles "Stuck on You" and "Like I Want You" began entering a number of Billboard R&B charts in late 2020, with the latter later being certified gold by the Recording Industry Association of America in December 2020. During this time, Giveon earned his first-ever Grammy Award nomination when Take Time was nominated for Best R&B Album at the 2021 Grammy Awards. He also made his debut television performance on Jimmy Kimmel Live!, performing "Stuck on You".

During the week of February 27, 2021, Giveon earned his second and third Billboard Hot 100 entries with "Heartbreak Anniversary" and "Like I Want You", entering the chart at numbers 74 and 95, respectively. On March 12, he released the compilation album, When It's All Said and Done... Take Time, a combination of his first two EPs, which included a new song titled "All to Me". Just a week later, his "Chicago Freestyle" esteem was boosted by his feature on Justin Bieber's "Peaches" from his album Justice.

MTV Video Music Awards 2021: Performer of the year and best music video of the year
Business
2981
View all