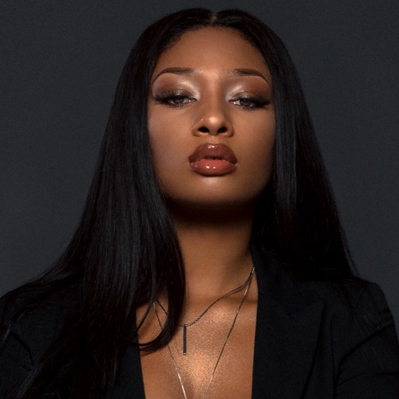 Megan Jovon Ruth Pete known professionally as Megan Thee Stallion, is an American rapper and songwriter. Originally from Houston, Texas, she first garnered attention when videos of her freestyling became popular on social media platforms such as Instagram.

Megan Thee Stallion signed to 300 Entertainment in 2018 where she released the mixtape Fever (2019), the extended play Suga (2020), and her debut studio album, Good News (2020); all of which peaked in the top 10 of the Billboard 200. Her single "Savage (Remix)" featuring Beyoncé, and her feature on Cardi B's single "WAP" were her first and second number ones on the US Billboard Hot 100 chart, with both being released in 2020.

Throughout her career, Megan Thee Stallion has received several accolades, including six BET Awards, five BET Hip Hop Awards, two MTV Video Music Awards, a Billboard Women in Music Award, and three Grammy Awards. At the 63rd Annual Grammy Awards, she became the second female rapper to win Best New Artist, after Lauryn Hill in 1999. In 2020, Time magazine named her one of the 100 most influential people in the world on their annual list.

Megan Jovon Ruth Pete was born on February 15, 1995 in San Antonio, Texas, and her mother, Holly Thomas, immediately moved to Houston after her birth. Thomas rapped under the name "Holly-Wood" and would bring her daughter with her to recording sessions instead of putting her in daycare. Pete was raised in the South Park neighborhood of Houston, before moving with her mother to Pearland, Texas at age 14, where she lived until she turned 18. Pete began writing raps at age 16. When she told her mother that she wanted to rap, Holly required that Pete wait until she was 21 to pursue rapping as a career. Her mother commented that her lyrics were too sexually suggestive for her young age. Pete attended Pearland High School and graduated in 2013. Her father died during her freshman year of high school.

In 2013, while Pete was a student at Prairie View A&M University, she began uploading videos of herself freestyling on social media. A clip of Pete battling against male opponents in a "cypher" went viral. The exposure helped Pete gain a larger digital presence and following on social media. She garnered fans by posting her freestyles on her Instagram while in college. She refers to her fans as "hotties" and credits her hyperactive fan base for her early success.

She adopted the stage name "Megan Thee Stallion" because she was called a "stallion" in adolescence due to her height (5′10″ or 178 cm)[7] and "thick" body frame: voluptuous and statuesque women in the South are colloquially called stallions.

Megan Thee Stallion mentions being part Creole in her songs "Cocky AF" and "Freak Nasty" as well as in a tweet in September 2017. Her mother, Holly Thomas, died in March 2019 from a longstanding cancerous brain tumor, and her grandmother died in the same month. In addition to acting as Megan's manager, Thomas influenced her decision to study health administration and also helped foster her wish to establish assisted living facilities in her hometown of Houston. After having previously taken time off school, she resumed her studies at Texas Southern University in health administration, where she was a third-year student as of 2019.