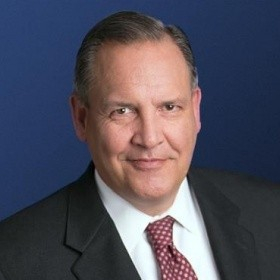 Gregory J. "Greg" Hayes (born 19 November 1960) is an American businessman. He was the chairman and CEO of United Technologies from September 2016 to April 2020, and is now the CEO of Raytheon Technologies.

Hayes played football at Cornell University, while studying pre-law for a year, then transferred to the Krannert School of Management at Purdue University, where he earned a Bachelor of Economics degree, in 1982. He later became a CPA.

After graduating, Hayes joined Sundstrand Corporation, which was acquired by United Technologies (UTC) in 1999. He rose through management, becoming CEO of UTC in November 2014, succeeding Louis R. Chênevert. Hayes was elected chairman in September 2016.

In April 2020, Raytheon Company completed their merger with UTC to form Raytheon Technologies. Hayes was named CEO of the combined company, and Raytheon chairman and CEO Thomas A. Kennedy was named executive chairman.

Hayes served on President Trump’s American Manufacturing Council in January of 2017, until resigning, in August of 2017.

He is a member of Business Roundtable and serves on the board of directors for Nucor.