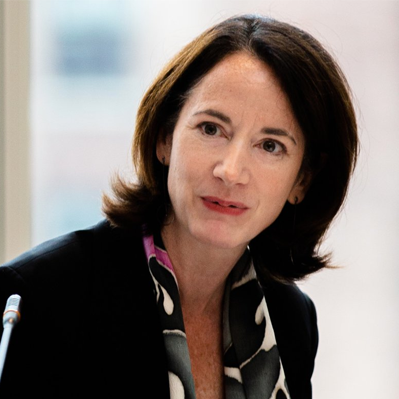 Avril Danica Haines is an American lawyer and former government official who served as the White House Deputy National Security Advisor in Barack Obama's administration. She previously served as Deputy Director of the Central Intelligence Agency, the first woman to hold this position. Prior to her appointment to the CIA, she served as Deputy Counsel to the President for National Security Affairs in the Office of White House Counsel.

She replaced Tony Blinken as White House Deputy National Security Advisor, a position she held until the end of the Obama administration.

On November 23, 2020, President-elect Joe Biden announced his nomination of Haines to serve as Director of National Intelligence in the Biden cabinet, which would make her the first woman to hold this position.

Haines was born in the New York City borough of Manhattan on August 29, 1969, to Adrian Rappin (née Adrienne Rappaport) and Thomas Haines. Her mother was a painter. Adrian developed chronic obstructive pulmonary disease and contracted avian tuberculosis, leading to her death when Haines was 15 years old. Her father is a biochemist and professor emeritus at City College, who helped found the CUNY School of Medicine, where he served as the chair of the biochemistry department.

After graduating from Hunter College High School, Haines traveled to Japan for a year and enrolled in Kodokan, an elite judo institute in Tokyo. In 1988, Haines enrolled in the University of Chicago where she studied theoretical physics. While attending the University of Chicago, Haines worked repairing car engines at a mechanic shop in Hyde Park.[6] In 1991 Haines took up flying lessons in New Jersey, where she met her future husband, David Davighi. She later graduated with her Bachelor of Arts in physics in 1992.

In 1992, Haines moved to Baltimore, Maryland, and enrolled as a doctoral student at Johns Hopkins University. However, later that year, Haines dropped out and with her future husband purchased at an auction a bar in Fell's Point, Baltimore, which had been seized in a drug raid; they turned the location into an independent bookstore and café. She named the store Adrian's Book Cafe, after her late mother; Adrian's realistic oil paintings filled the store. The bookstore won City Paper's "Best Independent Bookstore" in 1997 and was known for having an unusual collection of literary offerings, local writers, erotica reading nights, and small press publications. Adrian's hosted a number of literary readings, including erotica readings, which became a media focus when she was appointed by President Obama to be the Deputy Director of the CIA. She served as the president of the Fell's Point Business Association until 1998.

In 1998, she enrolled at the Georgetown University Law Center, receiving her Juris Doctor in 2001.