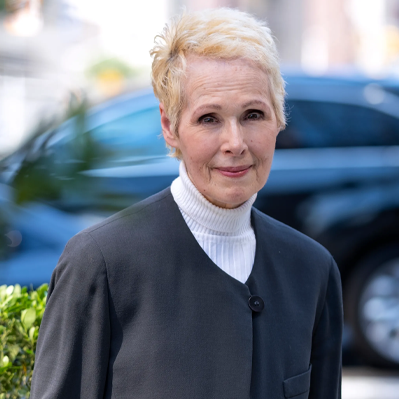 Elizabeth Jean Carroll is an American journalist, author, and advice columnist. Her "Ask E. Jean" column appeared in Elle magazine from 1993 through 2019, becoming one of the longest-running advice columns in American publishing.

The first female contributing editor for Playboy, Carroll was noted for her gonzo-style first person narrative as a journalist; The New York Times wrote that she was "feminism's answer to Hunter S. Thompson."

In her 2019 book, What Do We Need Men For?: A Modest Proposal, Carroll accused Les Moonves and Donald Trump of sexually assaulting her in the mid-1990s. Both Moonves and Trump denied the allegations.

Elizabeth Jean Carroll was born on December 12, 1943, in Detroit, Michigan. She also went by "Jeannie". Her father, Thomas F. "Tom" Carroll, Jr., was an inventor, and her mother, Betty (née McKinney) Carroll, was a retired Allen County, Indiana politician. Carroll was raised in Fort Wayne, Indiana and attended Indiana University. A Pi Beta Phi and a cheerleader, she was crowned Miss Indiana University in 1963, and in 1964, as a representative of the university, she won the Miss Cheerleader USA title. She appeared on To Tell The Truth in 1965.

Carroll's "Ask E. Jean" column appeared in Elle from 1993 until 2020. Widely read, it was acclaimed for Carroll's opinions on sex, her insistence that women should "never never" structure their lives around men, and her compassion for letter-writers experiencing difficult life situations. When it debuted, Amy Gross, a former editor-in-chief of Elle, compared the column to putting Carroll on a "bucking bronco", describing her responses to readers as "the cheers and whoops and hollers of a fearless woman having a good ol' time."

Carroll was fired from Elle in February 2020; she wrote on Twitter that she was dismissed "Because Trump ridiculed my reputation, laughed at my looks, & dragged me through the mud." Elle maintained that the decision to fire Carroll was a business decision unrelated to Trump.

Carroll wrote for Saturday Night Live in the mid-1980s. She was nominated for an Emmy for Outstanding Writing in a Variety or Music Program in 1987.

From 1994 through 1996, NBC's America's Talking—the predecessor to MSNBC—aired Ask E. Jean, a television series that Carroll produced. Entertainment Weekly called Carroll "the most entertaining cable talk show host you will never see." Carroll and the show were nominated for a CableACE Award in 1995.

Carroll was known for her gonzo-style first-person narratives. She hiked into the Star Mountains with an Atbalmin tracker and a Telefomin warrior; chronicled the lives of basketball groupies in a story called "Love in the Time of Magic"; and went to Indiana to investigate why four white farm kids were thrown out of school for dressing like black artists in "The Return of the White Negro". She tracked down her old boyfriends and moved in with them and their wives and went on a camping trip with Fran Lebowitz. Bill Tonelli, her Esquire and Rolling Stone editor, said in a 1999 interview that all of Carroll's stories were "pretty much the same thing. Which is: 'What is this person like when he or she is in a room with E. Jean?' She's institutionally incapable of being uninteresting."

Several of Carroll's pieces have been included in non-fiction anthologies such as The Best of Outside: The First 20 Years (Vintage Books, 1998), Out of the Noosphere: Adventure, Sports, Travel, and the Environment (Fireside, 1998) and Sand in My Bra: Funny Women Write from the Road (Traveler's Tales, 2003). Her 2002 story for Spin, "The Cheerleaders" was selected as one of the year's "Best True Crime Reporting" pieces. It appeared in Best American Crime Writing, edited by Otto Penzler, Thomas H. Cook, and Nicholas Pileggi (Pantheon Books, 2002).

In the late summer and fall of 2020 and the winter of 2021, Carroll published a series about the women who came forward to accuse Donald Trump of sexual misbehavior for The Atlantic, profiling Natasha Stoynoff, Karena Virginia, Jessica Leeds, Alva Johnson and Kristin Anderson. Vanity Fair published Carroll's profile of Jill Harth. This American Life featured her in conversation with Jessica Leeds.

In 2002, Carroll co-founded greatboyfriends.com with her sister, Cande Carroll. On the site, women recommended their ex-boyfriends to each other. GreatBoyfriends was acquired by The Knot Inc. in 2005. In 2004, she launched Catch27.com, a spoof of Facebook. On the site, people put their profiles on trading cards and bought, sold, and traded each other. She launched an online version of her column, askejean.com, in 2007. Ten years later Carroll co-founded Tawkify, "a personal concierge" for dating." She also advised Tawkify's matchmaking team.