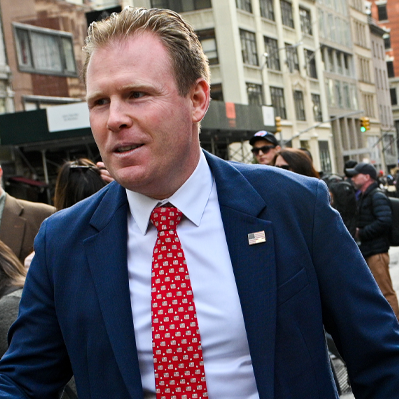 Andrew Harold Giuliani is an American political commentator and golfer. He was a special assistant to the President and associate director of the Office of Public Liaison, during the Trump administration. He is the son of former mayor of New York City Rudy Giuliani. Giuliani was a contributor for the conservative media channel Newsmax TV.

In May 2021, Giuliani announced that he would be running for governor of New York in 2022. He did not field a candidate for lieutenant governor.

In 2017, Giuliani was hired to work in the Trump Administration, in the Office of Public Liaison, as an Associate Director. In 2019, he was promoted to Special Assistant to the President. In his position, he helped arrange sports teams’ visits to the White House, and interfaced between the White House and business, nonprofit, and other groups, meeting with President Donald Trump up to four times a week. He also represented his office in White House meetings on the opioid crisis. He originally had an annual salary of $77,000, which by mid-2018 had increased to $90,700, and by mid-2019 was $95,000.

Giuliani's unescorted access to the West Wing was rescinded by White House Chief of Staff John F. Kelly around the beginning of June 2018. After Kelly's departure in January 2019, Mick Mulvaney restored Giuliani's access.

Giuliani has played golf with Trump since Giuliani was a teenager. Since starting work at the White House, he was a regular golf partner of Trump, and traveled with him for the sole purpose of playing a round or two of golf. In January 2020, the Irish Times called him "Trump's most regular playing partner".

In September 2020, The New York Post reported that Giuliani was considering running for mayor of New York City in 2021. Giuliani was critical of current mayor Bill de Blasio's policies, and especially of his budget cuts and disbanding of the New York Police Department's undercover anti-crime unit.

From March to May 2021, Giuliani was a contributor to Newsmax TV, hired to comment on news and politics. He left that position to run for governor.

On May 18, 2021, Giuliani formally announced his candidacy for governor of New York in the 2022 gubernatorial election.

Giuliani serves on the board of trustees of the United States Holocaust Memorial Museum.

On September 24, 2021, Politico Playbook reported that Fox News had banned Giuliani and his father from appearing on air. The report was disputed by Fox News, which said Giuliani had made multiple appearances on the network since announcing his gubernatorial run.

Giuliani faced three other candidates in the 2022 Republican gubernatorial primary. He was defeated by Lee Zeldin, who held a 20-point lead over Giuliani.