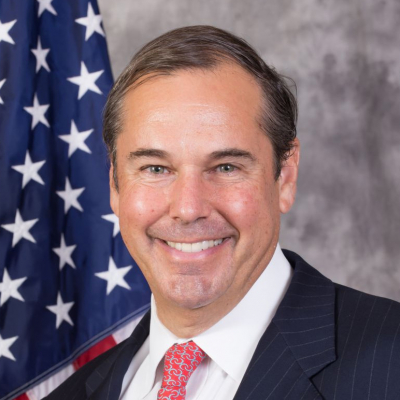 Ray Willets Washburne is an American businessman, political fundraiser, and government official. He served as President and CEO of the Overseas Private Investment Corporation from 2017 to 2019 and as a member of the President's Intelligence Advisory Board since 2019.

Washburne was born in Dallas, Texas in 1960, and was raised in Highland Park, later graduating from Southern Methodist University. In 1997 he married Heather Hill, a descendant of H. L. Hunt.

Washburne is a co-founder of the M Crowd Restaurant Group, owning forty-six restaurants, including the Mi Cocina and Taco Diner restaurant chains. He also has real-estate developments in several states and is the CEO of Charter Holdings. In 2009, Washburne and his wife Heather, along with Stephen Summers and his spouse Elisa Summers, who is Heather's sister, bought the Highland Park Village, an upscale shopping center in Dallas, for $170 million.

Washburne was actively involved in raising money for George W. Bush's presidential campaigns in both 2000 and 2004, and in the following years continued to raise money for the Republican Party. Later in the 2012 presidential election, he backed Mitt Romney, the Republican Party's nominee, and became the campaign's Texas co-chair, while also raising money. Following the 2012 election, in which Romney was defeated, Washburne became the finance chairman of the Republican National Committee, during which he raised $160 million for the party.

In 2015, he became a part of Chris Christie's 2016 campaign for president, serving as the finance director. Christie subsequently conceded in the race, and after Donald Trump emerged as the Republican front-runner, Washburne raised money for Trump's campaign and became the vice chairman of the Trump Victory Committee, which acted as a bridge between the campaign and the RNC.

In 2020, Washburne played a role in convincing Trump to call for restoring a tax break allowing corporations to fully deduct restaurant meal and entertainment costs.

On June 5, 2017, President Trump nominated Washburne as president of the Overseas Private Investment Corporation. The U.S. Senate confirmed him by voice vote on August 3, 2017. He worked to increase the OPIC's funding and activities despite the Trump administration's previous plans to shut down the agency.

In February 2019, Washburne announced he would resign as OPIC's head on March 1.

In 2019, Washburne was appointed to the President's Intelligence Advisory Board.

M Crowd Restaurant
Our story starts in 1991 with the opening of the first Mi Cocina. M Crowd was founded by four original partners Michael ‘Mico’ Rodriguez, Ray and Dick Washburne, and Bob McNutt. They leased...
Person in rating
All