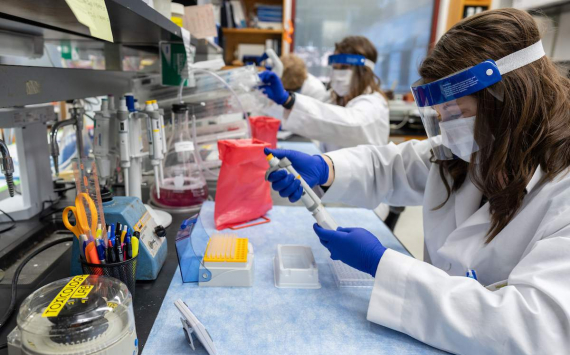 The stock market recovered slightly at the premarket on Monday after a sharp fall on Friday when the World Health Organisation (WHO) said that the new COVID-19 strain first identified in South Africa was a "strain of concern".

On Friday, the world's major Covid-19 vaccine makers said they were working to quickly research and adapt their vaccines to the new and highly mutated strain of the virus.

A South African government spokesman said the symptoms associated with Omicron cases were mild to moderate, Bloomberg reported. Chairman of South Africa's Ministerial Advisory Committee on Vaccines, said there had been no increase in hospitalisations in the country. The WHO's concern is due to a large number of mutations of the new strain in the spiking protein that allows Covid to penetrate and infect cells in the body. This means that as the COVID Omicron virus emerges, the risk of reinfection increases.

In addition, cases of the new strain among travellers have been officially confirmed in: Australia, Austria, UK, Netherlands, Germany, Belgium, Israel, Hong Kong and Italy.

The US ban on accepting passengers on flights from South Africa and seven other southern African countries comes into effect on Monday.

Pfizer (PFE) and BioNTech (BNTX) said they could adapt their mRNA vaccine to protect against the new strain within six weeks and begin shipping batches within 100 days. Johnson & Johnson on Friday said it was already testing a vaccine against Omicron.

Moderna (MRNA) and AstraZeneca are also researching the new strain of the virus. Moderna said it will develop a special booster dose for this strain. Moderna shares rose 20.6% on Friday, following a strong decline in the last quarter.

The Covid-19 vaccine is very effective in preventing hospitalisation and death, but its effects have declined over time. According to a study published in Science this month, the effectiveness of the Pfizer vaccine fell from 86% to 43%, Modena's from 89% to 58% and J&J's from 86% to 13%.

Petrol prices in the US rise above $4.5 a gallon
Economy
495

The best-preserved dinosaur skeleton of Deinonychus sold at Christie's for $12.4 million
Business
1394