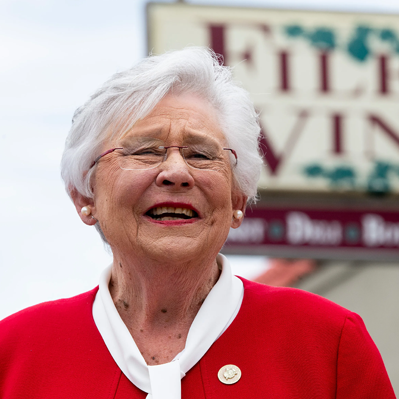 Ivey became Alabama's second female governor and the first female Republican governor upon the resignation of her predecessor, Robert J. Bentley. She won a full term in the 2018 gubernatorial election by a wide margin against challenger Walt Maddox. At age 76, Ivey is the oldest governor in the United States.

Ivey was born on October 15, 1944, in Camden, Alabama, as the only child to Boadman Nettles Ivey (1913–1997)[2] and Barbara Elizabeth (Nettles) Ivey (1915–1998). Her father was an army major in World War II, who later worked with the Gees Bend community as part of a federal program, the Farmers Home Administration.

Growing up in Camden, Ivey worked on her father's farm. She graduated from Auburn University, where she was a member of Alpha Gamma Delta, becoming president of her first-year pledge class, and served in the Student Government Association all four years. Ivey participated in a blackface skit while at Auburn, for which she later apologized. In 2021, Ivey received an honorary Doctor of Letters from Jacksonville State University.

In 1967, Ivey moved to California following a marriage and became a high school teacher for several years. Following the end of her marriage, she returned to Alabama and landed a position with Merchants National Bank, where she launched a school relations program to promote financial literacy. Ivey has been divorced twice and has no children.

Ivey has been married and divorced twice, and has no children. Her first marriage was to Ben LaRavia; they became engaged while studying at Auburn University.

In 2019, Ivey was diagnosed with lung cancer. She received an outpatient treatment at the University of Alabama at Birmingham on September 20, 2019. She said, "I am confident of God’s plan and purpose for my life." Ivey was declared cancer-free in January 2020. The cancer was Stage I and responded well to radiation treatment.

U.S. purchases another 200 million doses of coronavirus vaccine from Pfizer
Society
5408
View all