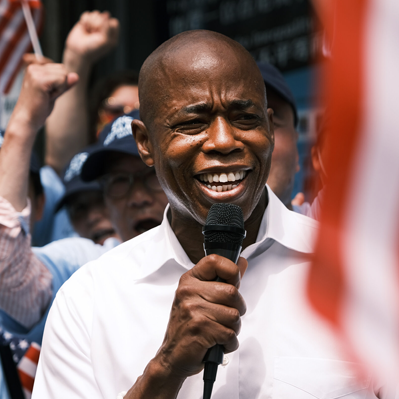 Eric Leroy Adams is an American retired police officer, politician, and author. He is the 18th and current Borough President of Brooklyn, New York City and is a candidate in the 2021 New York City mayoral election in the Democratic primary.

Adams was born in Brownsville, Brooklyn. He was raised in Bushwick, Brooklyn, and South Jamaica, Queens and was the fourth of six children. His mother worked double shifts as a housecleaner and had received only a third-grade education. His father was a butcher.

Adams graduated from Bayside High School in Queens in 1978. He began attending college while working as a clerk at the Brooklyn District Attorney's office, receiving an associate degree from the New York City College of Technology, a B.A. from the John Jay College of Criminal Justice, and an M.P.A. from Marist College.

When Adams was 15 years old, he and his brother were arrested for criminal trespassing. While in police custody, they were beaten by NYPD officers until a black cop intervened. Adams suffered from post-traumatic stress disorder after the incident but has said that the violent encounter motivated him to enter law enforcement. A local pastor added to his motivation when he suggested that by joining the police force, he could aid in reforming police culture from within.

He started in the New York City Transit Police, and continued with the NYPD when the transit police and the NYPD merged. He worked in the 6th Precinct in Greenwich Village, the 94th Precinct in Greenpoint, and the 88th Precinct covering Fort Greene and Clinton Hill. During the 1990s, Adams served as president of the Grand Council of Guardians, an African American patrolmen’s association. In 1995, he co-founded 100 Blacks in Law Enforcement Who Care, an advocacy group for black police officers that sought criminal justice reform and often spoke out against police brutality and racial profiling.

In 1999, Adams said on race in policing: "Lying is at the root of our training. At the academy, recruits are told that they should not see black or brown people as different, but we all do. We all know that the majority of people arrested for predatory crimes are African-American. We didn't create that scenario, but we have to police in that scenario. So we need to be honest and talk about it."

Adams owns a three-unit rowhouse in the Bedford-Stuyvesant neighborhood of Brooklyn, which he leases to tenants as a landlord. Adams and his partner, Tracey Collins, own a co-op in Fort Lee, New Jersey.

In 2016, Adams became a vegan after his diagnosis of type 2 diabetes. Adams researched alternatives to lifelong insulin injections and sought opinions of physicians including Dr. Caldwell B. Esselstyn Jr. of the Cleveland Clinic. Adams made lifestyle changes rather than pursuing traditional treatments for diabetes. He switched to a whole food plant-based diet, removing animal products, processed sugar, salt, oil and processed starches. He also began exercising regularly, including using an exercise bike and treadmill in his office. Within six months, he lost 30 pounds, reversed his diabetes, and reduced his blood pressure and cholesterol levels. He has stated that he wants to encourage others to switch to a healthier diet and that public health spending for diabetes should go towards lifestyle changes rather than treating disease. In October 2020, Adams published Healthy at Last: A Plant-Based Approach to Preventing and Reversing Diabetes and Other Chronic Illnesses, a book about his health journey that advocates for healthier lifestyles.

During the COVID-19 pandemic, Adams garnered attention while Brooklyn Borough President for sleeping at his office. Politico later questioned Adams regarding how often he spent time at his office, alleging that parts of his daily schedule were dedicated to non-governmental work. Adams clarified that he continues to sleep primarily at his office out of convenience. 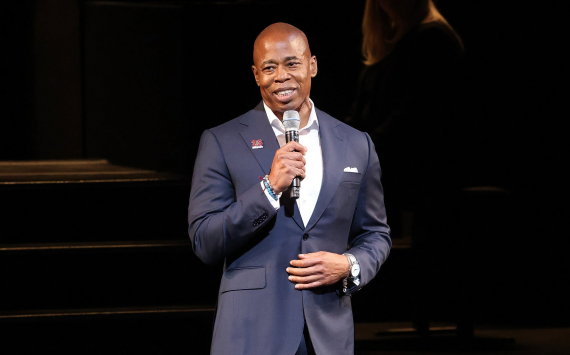 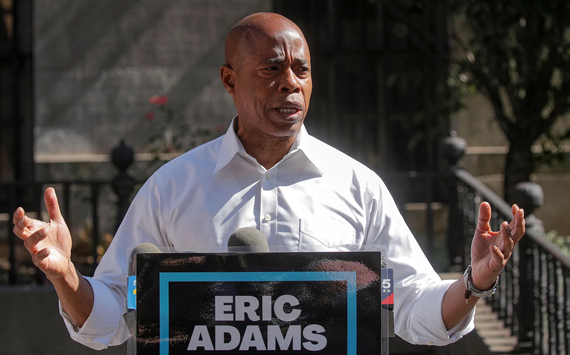 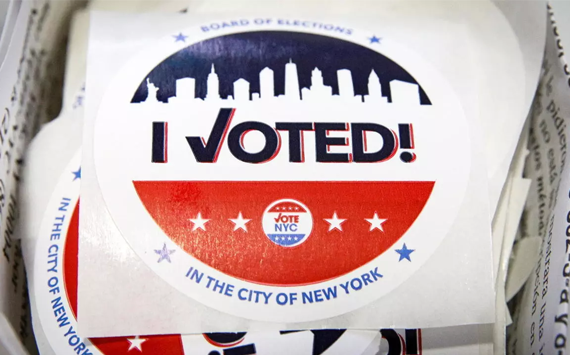 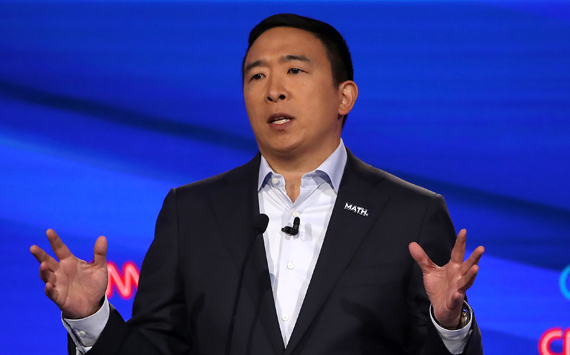 Eric Adams says NYC's government has been ‘dysfunctional for far too long’ in first speech as mayor
With a better city government and a laser focus on taming COVID, turning our economy around and lowering crime, we can add glory to more New York stories
View all

Alibaba Group
6 Persons
GlobalNY.biz pays special attention to the activities of famous people: politicians, officials, businessmen, bankers, cultural and sports figures. Their opinion largely determines the development of political, social and economic life in New York. The section is constantly edited by our journalists for the relevance of information. Here you can find information about CEOs and presidents of top New York companies, officials and public figures who play a key role in the development of the region.
The goal of the project is to create a comfortable information space for all market actors, as well as to acquaint the readership with business people in New York.
We have created an impressive database of people in New York, which contains information about a career path, education and other important information about a person.
Thanks to automatic counting of the number of mentions of a person in the news sections " New York News ”and“ New York Press Releases ”on the portal the rating of popularity and influence of persons is formed. The GlobalNY.biz team monitors rating changes and rewards project participants for their success. In general, the rating of participants is based on an in-depth analysis of the activity of PR services of famous people, and also reflects the qualitative state of the information field formed by the media and press services around the organization.
Business People of New York is a project about people who, through their ideas, words and deeds, have a great influence on the development and prosperity of New York.
Alena Potapova
Development Director
Subscribe to the person
Press Releases
All