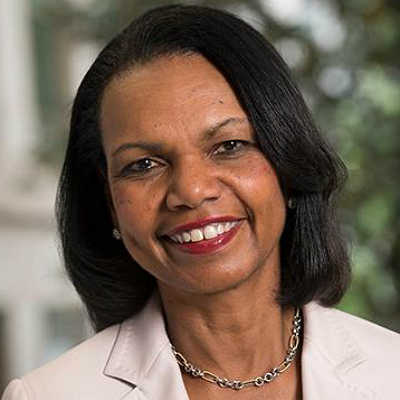 Condoleezza Rice is an American political scientist and diplomat born on 14th November 1954 in Birmingham, Alabama, United States. She served as the 66th United States Secretary of State, and the second person to hold that office in the administration of President George W. Bush.

Condoleezza Rice has an estimated net worth of $4 million.

Condoleezza Rice has never married and she has no children. She started dating an American football player Rick Upchurch and was brielfy engaged to him, she later left him.

Condoleezza Rice Rice began to learn French, music, figure skating and ballet at the age of three. At the age of fifteen, she began piano classes with the goal of becoming a concert pianist. While Rice ultimately did not become a professional pianist, she still practices often and plays with a chamber music group. She attended St. Mary’s Academy, a Catholic girls high school in Cherry Hills Village, Colorado, and graduated at 16 in 1971. She enrolled her self at Denver University where her father was serving as an assistant dean. She studied political science at Denver University where she got her degree in political science. In 1974 when, when she was 19 at the time she was inducted to the Phi Beta Kappa Society where she was awarded a B.A, cum laude in political science by the University of Denver.

She obtained a master’s degree in political science from the University of Notre Dame in 1975. She first worked in the State Department in 1977, during the Carter administration, and as an intern in the Bureau of Educational and Cultural Affairs. She also studied in Russia, Moscow State University in the summer of 1979. In 1981, when she was 26, she received her Ph.D. in political science from the Josef Korbel School of International Studies at the University of Denver.

Condoleezza Rice was a democratican since 1982 but she changed her political affiliation to republican. The reason was that she disagreed with the foreign policy of Democratic President Jimmy Carter.

Condoleezza Rice was hired by Stanford University as an assistant professor of political science (1981–1987). She was promoted as the associate professor a post that she held until 1993. She was a specialist on the Soviet Union and gave lectures on the subject for the Berkeley-Stanford joint program led by UC Berkeley Professor George W. Breslauer in the mid-1980s. She attended the 1985 meeting of arms, control experts at Stanford, her performance drew the attention of Brent Scowcroft, who had served as National Security Advisor under Gerald Ford. With the election of George H. W. Bush, Scowcroft returned to the White House as National Security Adviser in 1989, and he asked Rice to become his Soviet expert on the United States National Security Council. According to R. Nicholas Burns, President Bush was “captivated” by Rice, and relied heavily on her advice in his dealings with Mikhail Gorbachev and Boris Yeltsin.

Because she would have been ineligible for tenure at Stanford if she had been absent for more than two years, she returned there in 1991. She then undertook wing of George P. Shultz and(Ronald Reagan’s Secretary of State from 1982 to 1989), who was a fellow at the Hoover Institution. Shultz included Rice in a “luncheon club” of intellectuals who met every few weeks to discuss foreign affairs.In 1992, Shultz, who was a board member of Chevron Corporation, recommended Rice for a spot on the Chevron board. Chevron was pursuing a $10 billion development project in Kazakhstan and, as a Soviet specialist, Rice knew the President of Kazakhstan, Nursultan Nazarbayev. She traveled to Kazakhstan on Chevron’s behalf and, in honor of her work, in 1993, Chevron named a 129,000-ton supertanker SS Condoleezza Rice. During this period, Rice was also appointed to the boards of Transamerica Corporation (1991) and Hewlett-Packard (1992).

Condoleezza Rice served as the special assistant to the director of the Joint Chiefs of Staff. she served in President George H. W. Bush’s administration as director, and then senior director, of Soviet and East European Affairs in the National Security Council, and a Special Assistant to the President for National Security Affairs. In this position, Rice wrote what would become known as the “Chicken Kiev speech” in which Bush advised the Verkhovna Rada, Ukraine’s parliament, against independence. She has also develop as Bush’s Secretary of State and James Baker’s policies in favor of German reunification. She impressed Bush, who later introduced her to Soviet leader Mikhail Gorbachev, as the one who “tells me everything I know about the Soviet Union.

In 1997 she sat on the Federal Advisory Committee on Gender-Intergrated Training in the Millitary. During George W. Bush’s presidential election campaign in 2000, she took a one-year leave of absence from Stanford University to serve as his foreign policy advisor. The group of advisors she led called itself The Vulcans in honor of the monumental Vulcan statue, which sits on a hill overlooking her hometown of Birmingham, Alabama. Rice would later go on to give a noteworthy speech at the 2000 Republican National Convention. The speech asserted that “… America’s armed forces are not a global police force. They are not the world’s 911.

Condoleezza Rice was named the National Security Advisor in 17th December 2000 and she stepped down in her position at Stanford, she was the first woman to occupy such a position. During the 2001 summer she met the CIA Director George Tenet to discuss the possibilities and prevention of terrorist attacks on American targets. On July 10, 2001, she met with Tenet what he referred to as an “emergency meeting..held at the White House at Tenet’s request to brief Rice and the NSC staff about the potential threat of an impending al Qaeda attack. Rice responded by asking Tenet to give a presentation on the matter to Secretary Donald Rumsfeld and Attorney General John Ashcroft. In August 6, 2001 she met President’s Bin Ladin in a Daily brief that Determined the Strike in US as historical information. she indicated the information based on old reporting.

Sean Wilentz of Salon magazine suggested that the PDB contained current information based on continuing investigations, including that Bin Laden wanted to “bring the fighting to America.” On September 11, 2001, Rice was scheduled to outline a new national security policy that included missile defense as a cornerstone and played down the threat of stateless terrorism. President Bush addresses the media at the Pentagon on September 17, 2001 When asked in 2006 about the July 2001 meeting, Rice asserted she did not recall the specific meeting, commenting that she had met repeatedly with Tenet that summer about terrorist threats. Moreover, she stated that it was “incomprehensible” to her that she had ignored terrorist threats two months before the September 11 attacks. In 2003, Rice received the U.S. Senator John Heinz Award for Greatest Public Service by an Elected or Appointed Official, an award given out annually by Jefferson Awards. In August 2010, Rice received the U.S. Air Force Academy’s 2009 Thomas D. White National Defense Award for contributions to the defense and security of the United States.