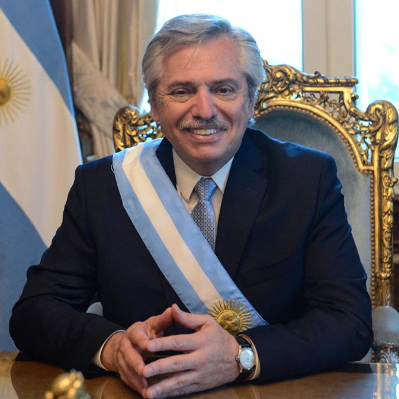 Alberto Ángel Fernández is an Argentine politician, lawyer and professor, serving as president of Argentina since 2019.

Born in Buenos Aires, Fernández attended the University of Buenos Aires, where he earned his law degree at the age of 24, and later became a professor of criminal law. He entered public service as an adviser to Deliberative Council of Buenos Aires and the Argentine Chamber of Deputies. In 2003, he was appointed Chief of the Cabinet of Ministers, serving during the entirety of the presidency of Néstor Kirchner, and the early months of the presidency of Cristina Fernández de Kirchner.

A member of the center-left Peronist Justicialist Party, Fernández was the party's candidate for 2019 presidential election and defeated incumbent president Mauricio Macri, with 48% of the votes. His presidency has been dominated by the COVID-19 pandemic in Argentina, during which he imposed strict lockdown measures to suppress the spread of the disease.

In foreign policy, during early months of his presidency, Argentina's relations with Brazil suffered due to conflict with Brazilian president Jair Bolsonaro. Following the 2019 Bolivian general election, Fernández questioned the conclusion of the Organization of American States that the reelection of Evo Morales was illegitimate due to electoral fraud.

Fernández was born in Buenos Aires, son of Celia Pérez and her first husband. Separated from the latter, Celia (sister of the personal photographer of Juan Domingo Perón) married Judge Carlos Pelagio Galíndez (son of a Senator of the Radical Civic Union). Alberto Fernández, who barely knew his biological father, considers Pelagio to be his father.

Alberto Fernández attended Law School at the University of Buenos Aires. He graduated at the age of 24, and later became a professor of criminal law. He entered public service as an adviser to Deliberative Council of Buenos Aires and the Argentine Chamber of Deputies. He became Deputy Director of Legal Affairs of the Economy Ministry, and in this capacity served as chief Argentine negotiator at the GATT Uruguay Round. Nominated by newly elected President Carlos Menem to serve as Superintendent of Insurance, Fernández served as President of the Latin American Insurance Managers' Association from 1989 to 1992, and co-founded the Insurance Managers International Association. He also served as adviser to Mercosur and ALADI on insurance law, and was involved in insurance and health services companies in the private sector. Fernández was named one of the Ten Outstanding Young People of Argentina in 1992, and was awarded the Millennium Award as one of the nation's Businessmen of the Century, among other recognitions. During this time he became politically close to former Buenos Aires Province Governor Eduardo Duhalde.

He was elected on 7 June 2000, to the Buenos Aires City Legislature on the conservative Action for the Republic ticket led by former Economy Minister Domingo Cavallo.