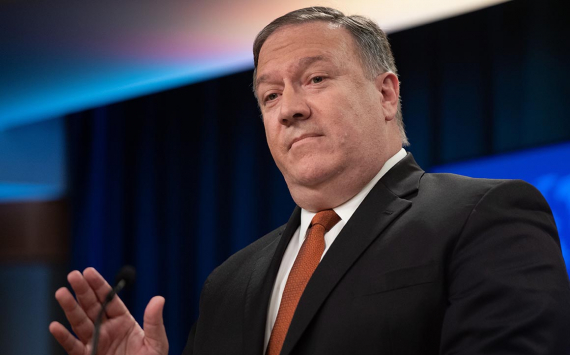 A State Department employee who reported witnessing misconduct by Secretary of State Mike Pompeo as well as hearing “numerous firsthand accounts” of such behavior was blocked from further addressing the issue by top department officials who were protecting Mr. Pompeo, according to a newly public copy of the employee’s whistle-blower complaint.

The heavily redacted version of the complaint indicates that top officials enabled misconduct by Mr. Pompeo even after the whistle-blower voiced the concerns internally — an alleged circle of complicity that was not previously known. After encountering resistance from the department’s executive and legal offices, the whistle-blower filed the complaint with the agency’s Office of the Inspector General, which apparently prompted an investigation into misuse of taxpayer resources by Mr. Pompeo and his wife, Susan.

Details of the inquiry into the Pompeos, coming amid a cloud of accusations that critics say shows a pattern of abuse of taxpayer money, have emerged gradually since May, when congressional aides told journalists about it. The inquiry was one of at least two investigations that the inspector general, Steve A. Linick, was conducting into Mr. Pompeo’s actions at the department when President Trump abruptly fired Mr. Linick in May, at the urging of Mr. Pompeo. Mr. Linick, known to be cautious and nonpartisan, had served as inspector general since 2013 and ran an office of hundreds that investigated fraud and waste at the State Department.

Three congressional committees are investigating Mr. Pompeo’s role in the firing of Mr. Linick. Critics say Mr. Pompeo, a Trump loyalist, appears to have prodded the president to fire Mr. Linick out of retribution and to avoid accountability. Mr. Pompeo has admitted he knew about at least one of Mr. Linick’s investigations — a nearly completed inquiry into whether Mr. Pompeo acted illegally last year in declaring an “emergency” to bypass Congress to push through $8.1 billion of arms sales to Saudi Arabia and the United Arab Emirates.

However, Mr. Pompeo has said he did not push to fire Mr. Linick as retaliation. He said Mr. Linick was “undermining” the mission of the department, though he declined to give details.

The four-page whistle-blower complaint was obtained by American Oversight, a liberal watchdog group, through a Freedom of Information Act request into any records of complaints submitted over the conduct of Mr. Pompeo. The inspector general’s office turned over the redacted complaint, which American Oversight shared first with McClatchy.

The complaint says the misconduct took place in Washington, in New York, in Florida and overseas. The parts of the complaint that specify the misconduct and people involved are heavily redacted, though the phrase “false or misleading statements” is visible.

The whistle-blower tried “on several occasions to obtain clarifications and guidance” from department leadership in the executive office and from officials in the Office of the Legal Adviser, the complaint said, but was prevented from doing so. The department’s acting legal adviser is Marik String, a political appointee who worked with Mr. Pompeo on the Saudi arms sales.

The person making the complaint also said some officials — the names are redacted — were repeatedly made aware of the misconduct concerns, but none took action, and several “specifically directed subordinate staff to continue facilitating questionable activities after the concerns were raised.”

In May, after Mr. Linick’s firing, Democratic aides said Mr. Linick had been looking into how the Pompeos had misused a political appointee who is a full-time State Department employee for personal errands. One aide said the employee regularly picked up dry cleaning, made restaurant reservations and walked the family dog, Sherman. The aide said multiple State Department employees had witnessed the transgressions by the Pompeos.

There are indications the accusations of misuse of resources went much deeper and involved activities related to Mr. Pompeo’s political career. Laws and federal rules prohibit government employees from using taxpayer resources for personal political activities.

A focus of Mr. Linick’s inquiry was Toni Porter, a longtime friend of the Pompeos’ who is on the State Department payroll as a special adviser to Mr. Pompeo and helped set up domestic travel and events for the couple. For instance, Ms. Porter helped Ms. Pompeo plan two dozen private “Madison Dinners” in a historic room in the State Department. The Pompeos hosted about 500 people total at the taxpayer-funded dinners, with most of the guests being Republican donors and political figures.

Ms. Porter has declined to comment on her activities for the Pompeos.

Mr. Pompeo has come under scrutiny for quietly visiting Republican donors and political figures on taxpayer-funded trips made under the auspices of the State Department in the United States and overseas. Mr. Pompeo, a Republican former congressman from Kansas, was until recently considering running for an open Senate seat in the state and hopes to run for president in 2024, his associates have said.

“From political trips around the country to reports of misusing taxpayer-funded staff, the question remains: Is Secretary Pompeo using his office to serve the country or himself?” said Austin Evers, the executive director of American Oversight.

In January, during an official trip to Florida, Mr. Pompeo made a secret visit to a retirement enclave populated by prominent Republican donors. Like other such visits, he kept it off his public schedule and did not tell reporters covering his Florida travels about the side trip. It is unclear if the reference to Florida in the whistle-blower complaint is related to such trips.

In a letter replying to the American Oversight request, the inspector general’s office said some redactions had been made to the whistle-blower complaint because of investigations that include “ongoing proceedings.” That could indicate that the office’s investigation into the misuse of taxpayer resources by Mr. Pompeo and his wife continues despite Mr. Linick’s dismissal.

After firing Mr. Linick, Mr. Trump named Stephen J. Akard, a political appointee who runs the State Department’s Office of Foreign Missions, to be acting inspector general. Mr. Akard is an associate of Vice President Mike Pence. He has declined to leave his State Department job, creating a clear conflict of interest with his role as the department’s inspector general.

Persons6 and Companies4 in the news

Americans' expectations for year-ahead inflation rose to 3.4% in April
Economy
256