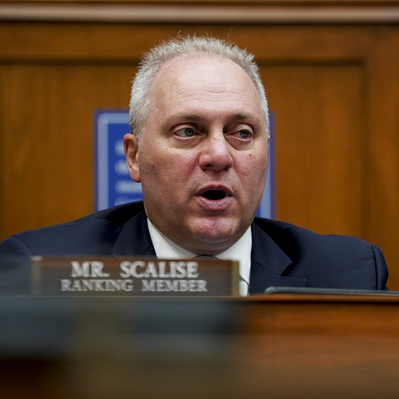 House Minority Whip of the United States House of Representatives

Stephen Joseph Scalise is an American politician who is the United States House of Representatives minority whip and representative for Louisiana's 1st congressional district, serving since 2008. The district includes most of New Orleans's suburbs, such as Metarie, Kenner, and Slidell, as well as a portion of New Orleans itself. He is a member of the Republican Party and was the chair of the conservative House Republican Study Committee.

Before his election to Congress, Scalise served four months in the Louisiana State Senate and twelve years in the Louisiana House of Representatives. On June 19, 2014, Scalise's Republican colleagues elected him majority whip of the United States House of Representatives. He assumed office on August 1. He is the first Louisianian to serve as majority whip since Hale Boggs of Louisiana's 2nd congressional district held the position from 1962 to 1971. In 2017, Scalise became the dean of the Louisiana Congressional delegation upon Senator David Vitter's retirement.

On June 14, 2017, Scalise was shot by a left-wing activist, who was targeting Republicans, and seriously wounded during practice for the Congressional Baseball Game. He underwent treatment for several months, returning to Congress on September 28.

After Joe Biden won the 2020 presidential election, Scalise supported Donald Trump’s position by falsely denying Biden's victory and participating in efforts to overturn the results. As of October 2021, Scalise still refuses to acknowledge that President Biden won the election legitimately.

Scalise was born in New Orleans, one of three children of Alfred Joseph Scalise, a real estate broker who died on October 8, 2015, at the age of 77, and the former Carol Schilleci. His siblings are Glenn and Tara Scalise.

Scalise's great-grandparents immigrated to the United States from Italy in the late 1800s. He graduated from Archbishop Rummel High School in Metairie in Jefferson Parish and earned a Bachelor of Science degree from Louisiana State University in Baton Rouge with a major in computer science and a minor in political science. At Louisiana State University, Scalise was a member of the Acacia Fraternity. He serves on the board of the American Italian Renaissance Foundation, servicing the American Italian Cultural Center.

Republican (formerly Democratic) State Representative Quentin Dastugue made an unsuccessful bid for Governor of Louisiana in 1995, dropping out before the nonpartisan blanket primary. Scalise was recruited by state Republicans to run for Dastugue's District 82 seat in the Louisiana House of Representatives, winning his election bid. Scalise was re-elected to the seat in 1999 and 2003, serving until 2007. His legislative peers named him to the House Appropriations Committee as the representative of the First Congressional District. Scalise opposed the 2002 Stelly Plan, a proposal by Lake Charles Representative Vic Stelly, since enacted and then repealed, to reduce certain state sales taxes on food for home consumption and utilities in exchange for higher state income taxes.

Scalise was elected in the October 20, 2007 nonpartisan blanket primary to the District 9 seat in the Louisiana Senate vacated by the term-limited Ken Hollis of Metairie. Scalise received 19,154 votes (61 percent) in a three-way contest. Fellow Republican Polly Thomas, an education professor at the University of New Orleans who subsequently won a special state House election in 2016, polled 8,948 votes (29 percent). A Democrat, David Gereighty, polled 3,154 votes (10 percent) in the heavily Republican-oriented district. Scalise, who was term-limited out of the House, was succeeded in the state House by his aide, Cameron Henry of Metairie.