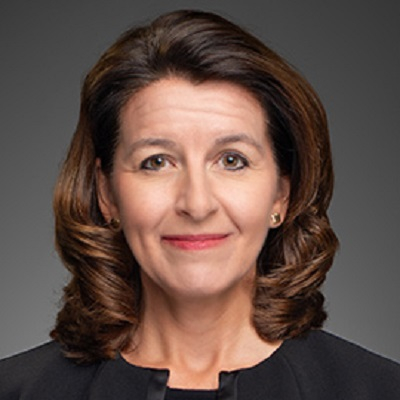 Kathy J. Warden (born 24 Oct 1949) is an American business executive who serves as chief executive officer and president of Northrop Grumman, as of 2019.

Warden is a cybersecurity and information technology expert. Early in her career, she worked for General Electric for nearly a decade, and held executive roles at Veridian Corporation and General Dynamics.Warden was also a principal in a venture capital firm, where she helped companies improve their business models and electronic publishing services.

Warden joined Northrop Grumman in 2008, initially serving as vice president and general manager of the company's cybersecurity business. In 2015, while serving as president of Northrop Grumman Information Systems, she was included in Federal Computer Week's "Federal 100" list; the magazine credited her for increasing Northrop Grumman's participation in the CyberPatriot program and creation of the Advanced Cyber Technology Center, and for overseeing $1.5 billion in contracts for the 2014 fiscal year. Warden began her tenure as president of the Mission Systems sector in January 2016, when the company merged its Information Systems and Electronics Systems sectors. She has served as president and COO of Northrop Grumman since September 2017, and her tenure as CEO started on January 1, 2019.

Warden has been credited with leading the integration of Orbital ATK, now Northrop Grumman Innovation Systems. She was elected to Northrop Grumman's board of directors since her appointment to the CEO role in mid-2018.

Board service and recognition

Warden served on the Clinton administration's Internet Advisory Council. She has a position on the board of the Wolf Trap National Park for the Performing Arts. She serves on the Federal Reserve Bank of Richmond board, as of mid-2018. She also works with the Aspen Institute's computer security strategy group.

Northrop Grumman
Northrop Grumman Corporation (NYSE: NOC) is an American global aerospace and defense technology company. With 90,000 employees and an annual revenue in excess of $30 billion,...
Person in rating
All