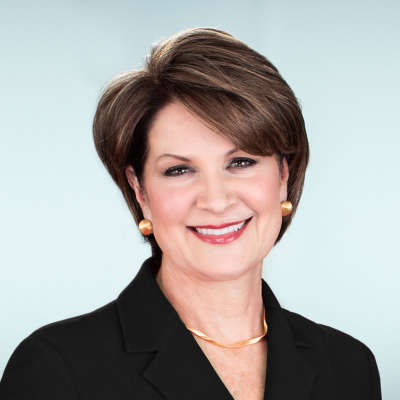 Hewson was born in Junction City, Kansas to Warren Adams and Mary Adams. Her father died when she was nine-years-old and her mother, a former WAC, raised five siblings, then aged five to 15. Hewson credits her mother's resilience, hard work, and determination with teaching her leadership skills and wrote, in "A mother's resilience", for Politico, in 2013, that "My mother did what all great leaders do: She sparked the growth of future leaders."

She earned her Bachelor of Science degree in business administration and her Master of Arts degree in economics from the University of Alabama. She also attended the Columbia Business School and Harvard Business School executive development programs.

On March 16, 2020, Lockheed announced that Hewson would become the executive chair of the board and be replaced as CEO on June 15. James Taiclet will take the lead after Hewson.

Hewson was inducted into the 2017 edition of the Wash100 for international market focus and F-35 leadership.

Hewson was named "CEO of the Year" for 2018 by Chief Executive magazine, and was a member of the selection committee for 2019.

In 2018, Hewson was also awarded the Edison Achievement Award for her leadership and achievements in making a lasting contribution to the world of innovation.

Hewson is married and lives in McLean, Virginia, as of 2020.

Lockheed Martin
Lockheed Martin Corporation is an American global aerospace, defense, security, and advanced technologies company with worldwide interests. It was formed by the merger of Lockheed...
Person in rating
All