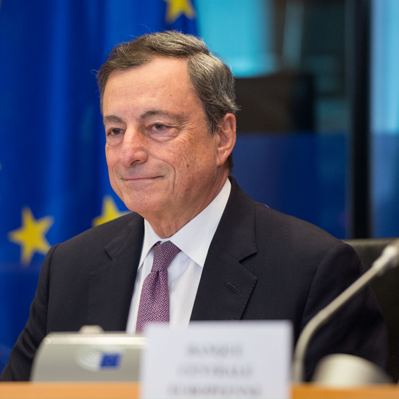 Mario Draghi is an Italian economist, central banker, academic and civil servant who is serving as Prime Minister of Italy since 13 February 2021. He previously served as President of the European Central Bank from 2011 until 2019. Draghi was also Chair of the Financial Stability Board from 2009 to 2011 and Governor of the Bank of Italy from 2005 to 2011

Mario Draghi was born in Rome in 1947 to an upper-class family; his father Carlo, who was born in Padua, first joined the Bank of Italy in 1922, and later worked for the Institute for Industrial Reconstruction (IRI) and for the Banca Nazionale del Lavoro; while his mother, Gilda Mancini, who was born in Monteverde, Campania, near Avellino, was a pharmacist. He is the eldest of three children: Andreina, an art historian, and Marcello, an entrepreneur. When he was 15 years old he lost his father, who was born in 1895, and soon after at 19 he lost his mother.

Draghi studied at the Massimiliano Massimo Institute, a Jesuit school in Rome, where he was a classmate of the future chairman of Ferrari, Luca Cordero di Montezemolo, and the future television presenter, Giancarlo Magalli. In 1970, he graduated with honours in Economics at the Sapienza University of Rome, under the supervision of Keynesian economist Federico Caffè; his graduation dissertation was titled "Economic integration and the variation of exchange rates". In his dissertation, Draghi was particularly critical of Luxembourg Prime Minister Pierre Werner's remarks that European monetary union was "premature". Draghi went on to earn a PhD in Economics from the Massachusetts Institute of Technology in 1976, this time with a dissertation titled: "Essays on economic theory and applications", under the supervision of Franco Modigliani and Robert Solow.

In 1973, Mario Draghi married Serena Cappello, an expert in English literature, with whom he has two children: Federica, who worked as investment director of Genextra Spa and board member of Italian Angel for Biotechis, and Giacomo, a finance analyst, who worked as an interest-rate derivative trader at investment bank Morgan Stanley until 2017, and is now at the LMR Partners hedge fund.

Draghi is a Roman Catholic of Jesuit education and is devout to St. Ignatius of Loyola. Draghi has homes in Rome's Parioli district and in Città della Pieve in Umbria. He is an avid supporter of A.S. Roma, the football team of his hometown, and a great fan of basketball.