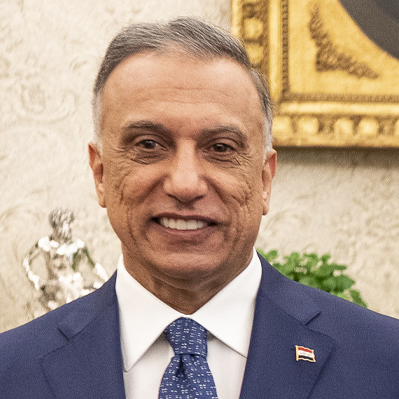 Mustafa Abdul Latif Mishatat, known as Mustafa al-Kadhimi, is an Iraqi politician, lawyer and bureaucrat and former intelligence officer who is serving as the Prime Minister of Iraq since May 2020. He previously served as columnist for several news outlets and the Director of the Iraqi National Intelligence Service, originally appointed in June 2016. He briefly served as Iraqi Minister of Foreign Affairs in an acting capacity in 2020.

Al-Kadhimi was born in Baghdad in 1967 to Abdul Latif, who was born in Al-Shatra, a town in southern Iraq, located northeast of Nasiriyah. He later migrated from Nasiriyah to Baghdad as a student.

Al-Kadhimi was a vocal opponent of the regime of Saddam Hussein. He escaped Iraq in 1985 for Iran then Germany, before settling in the United Kingdom, and lived in exile for several years, eventually becoming a citizen of the UK.

After the 2003 American-led invasion of Iraq, al-Kadhimi returned to Iraq and cofounded the Iraqi Media Network.

He was a columnist and an editor of the Iraqi version of Al-Monitor and contributed to various outlets. He has also published a number of books and studies. Al-Kadhimi was also the senior editor of Iraq's Newsweek magazine for three years.

Al-Khadhimi studied law at Al-Turath University, was responsible for reforming the Iraqi National Intelligence Service (INIS) to be more effective and to meet international standards. He oversaw ending the politicization of intelligence action, implementing advanced methods to intelligence gathering and analysis, and setting priorities to broaden the scope of the work of the National Intelligence Service. Under his leadership, the agency expanded its remit, particularly in counter-terrorism, both internally and abroad, playing a vital role in Iraq's fight against the ISIL, also known as Daesh. During his tenure, he established links with scores of countries and bureaus working within the US-led federation against ISIL.