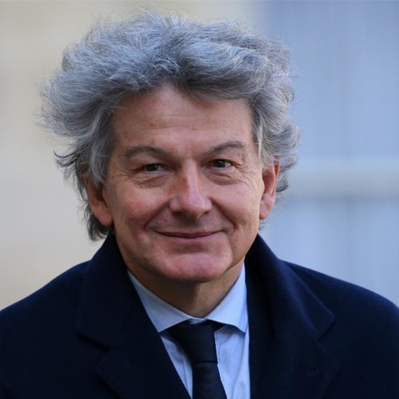 Thierry Breton is a French businessman and politician who has been serving as the European Commissioner for Internal Market since 2019. He previously was a professor at Harvard Business School and a Finance minister of France. In the private sector, he has been vice-chairman and CEO of Groupe Bull, Chairman and CEO of Thomson-RCA (1997–2002), Chairman and CEO of France Télécom (2002–2005). An Honorary Chairman of both Thomson and France Telecom, he most recently Chairman and CEO of international information technology services company Atos from 2008 until 2019.

Breton was born in the 14th arrondissement of Paris. His father was a civil servant in the agency responsible for developing nuclear energy. He completed his middle and high school education at the Ecole alsacienne in Paris and University-preparatory school classes for the Grandes écoles at Lycée Louis-le-Grand.

Breton began his career in 1979 as a teacher of IT and Mathematics at the Lycée Français de New York as part of his military service through cooperation. In 1981 he created Forma Systems, a systems-analysis and software-engineering company of which he became CEO until 1986.

In 1986 Breton became adviser to the French Ministry of Education and Research René Monory and designed open-air science and technology theme park Futuroscope. From 1990 to 1993, he was managing director of CGI Group, a global information technology company.

Breton has been married to journalist Nicole-Valerie Baroin since 1982. They have a daughter and grandchildren living in Berlin. Breton speaks some German.

SHAPIRO Benjamin
Founder of The Daily Wire
6 place
View all

Large technology companies in the USA are at risk of business separation
This crisis has shown the systemic nature of the problems and the role of certain platforms, which often behave as if they are too big to care about legitimate concerns about their own influence...
View all