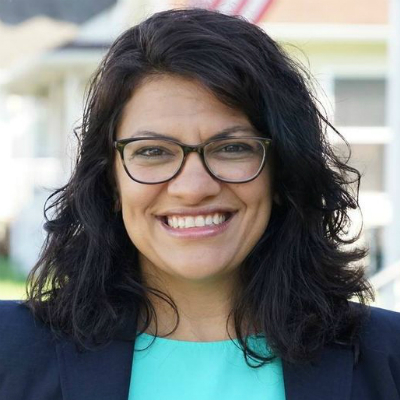 Activity: The American politician and lawyer serving as the U.S. Representative for Michigan's 13th congressional district since 2019. A member of the Democratic Party, Tlaib represented the 6th and 12th districts of the Michigan House of Representatives before her

Rashida Harbi Tlaib  born July 24, 1976 is an American politician and lawyer serving as the U.S. Representative for Michigan's 13th congressional district since 2019. The district includes the western half of Detroit, along with several of its western suburbs and much of the Downriver area. A member of the Democratic Party, Tlaib represented the 6th and 12th districts of the Michigan House of Representatives before her election to Congress.

In 2018, Tlaib won the Democratic nomination for the United States House of Representatives seat from Michigan's 13th congressional district. She ran unopposed in the general election and became the first woman of Palestinian descent in Congress, the first Muslim woman to serve in the Michigan legislature, and one of the first two Muslim women elected to Congress, along with Ilhan Omar (D-MN).

Tlaib is a member of the Democratic Socialists of America (DSA). She and Alexandria Ocasio-Cortez (D-NY) are the first female DSA members to serve in Congress. Tlaib has been a vocal critic of the Trump administration and advocated Trump's impeachment. On foreign affairs, she has sharply criticized the Israeli government, called for an end to U.S. aid to Israel, and expressed support for the Boycott, Divestment and Sanctions campaign.

Tlaib has gained notice for being a member of "The Squad" along with fellow House freshmen Omar, Ayanna Pressley (D-MA), and Ocasio-Cortez.

The eldest of 14 children, Rashida Harbi was born on July 24, 1976, to working-class Palestinian immigrants in Detroit. Her mother was born in Beit Ur El Foka, near the West Bank city of Ramallah. Her father was born in Beit Hanina, a neighborhood in East Jerusalem. He moved first to Nicaragua, then to Detroit. He worked on an assembly line in a Ford Motor Company plant. As the eldest, Tlaib played a role in raising her siblings while her parents worked.

Harbi attended elementary school at Harms, Bennett Elementary, and Phoenix Academy. She graduated from Southwestern High School in Detroit in 1994. Tlaib gained a Bachelor of Arts degree in political science from Wayne State University in 1998 and then graduated as a Juris Doctor at Western Michigan University Cooley Law School in 2004.

Tlaib began her political career in 2004 when she interned with State Representative Steve Tobocman. When Tobocman became Majority Floor Leader in 2007, he hired Tlaib to his staff. In 2008 Tobocman encouraged Tlaib to run for his seat, which he was vacating due to term limits. The urban district is 40% Hispanic, 25% African-American, 30% non-Hispanic white Americans, and 2% Arab American. Tlaib faced a crowded primary that included several Latinos, including former State Representative Belda Garza. She emerged victorious, carrying 44% of the vote in the eight-way Democratic primary and winning the general election with over 90% of the vote.

In 2010, Tlaib faced a primary election challenge from Jim Czachorowski in his first bid for office. Tlaib picked up 85% of the vote to Czachorowski's 15%, and won the general election with 92% of the vote against Republican challenger Darrin Daigle.

During her tenure as a legislator, Tlaib was one of ten Muslims serving in state legislatures across the United States. She is the second Muslim to serve in the Michigan State House of Representatives, after James Karoub. Tlaib is the second Muslim woman to serve in a state legislature nationwide, after Jamilah Nasheed of Missouri. She and Justin Amash, a Republican who was also elected in 2008, were the first two Palestinian-American members of the Michigan legislature.

In 2018, Tlaib announced her intention to run for John Conyers's seat in Congress. She filed in both the Democratic primary in the special election for the balance of Conyers's 27th term and in the general election for a full two-year term. Both elections were to be held the same day.

As of July 16, 2018, Tlaib had raised $893,030 in funds, more than her five opponents in the August 7 Democratic primary. Tlaib as a member of the Justice Democrats made a guest appearance on the political interview show Rebel HQ of the progressive media network The Young Turks (TYT).

In the Democratic primary for the special election, Tlaib finished second to Detroit City Council president Brenda Jones, who received 32,727 votes (37.7% of the total) to Tlaib's 31,084 (35.9%). Bill Wild, mayor of Westland, received 13,152 votes (15.2%) and Ian Conyers, the great-nephew of former Congressman Conyers, took fourth with 9,740 (11.2%). Jones faced no major-party opposition in the special election.

In the Democratic primary for the general election, Tlaib defeated Jones and Wild, among others. She received 27,803 votes, or 31.2%. She faced no major-party opposition in November 2018, though Jones mounted an eleventh-hour write-in bid.

Tlaib became the first Palestinian-American woman to be elected to Congress and simultaneously one of the first two Muslim women in Congress, along with fellow Democrat Ilhan Omar of Minnesota. She took the congressional oath of office on January 3, 2019, swearing in on an English-language translation of the Quran. She wore a thawb (thobe), a traditional embroidered Arab dress, to the swearing-in ceremony. This inspired a number of Palestinian and Palestinian-American women to share pictures on social media with the hashtag #TweetYourThobe.

Committee on Oversight and Reform

Tlaib has said she opposed providing aid to a "Netanyahu Israel" and supported the Palestinian right of return and a one-state solution. Tlaib is one of the few members of Congress to openly support the Boycott, Divestment and Sanctions (BDS) movement against Israel. She has defended her support of the boycott on free speech grounds and as a response to Israel's military occupation of the West Bank and settlement building, which the international community considers illegal under international law, though Israel disputes this. In January 2019, she criticized anti-BDS legislation proposed by Senators Marco Rubio and Jim Risch.

Tlaib argued that boycotting is a right and that Rubio and Risch "forgot what country they represent". Tlaib's comments were criticized by several groups, including the Anti-Defamation League, which said, "Though the legislation discussed is sponsored by four non-Jewish Senators, any charge of dual loyalty has special sensitivity and resonance for Jews, particularly in an environment of rising anti-Semitism." Tlaib responded that her comments were directed at Rubio and Risch, not the Jewish American community. She was one of 17 members of Congress to vote against a July 2019 House resolution condemning the BDS movement, which passed by a margin of 381 votes. Tlaib suggested boycotting HBO host Bill Maher after he denounced the BDS movement.

On August 15, 2019, Israel announced that Tlaib and her colleague Ilhan Omar would be denied entry into the country. According to The Times of Israel, Deputy Israeli Foreign Minister Tzipi Hotovely said Israel would not "allow those who deny our right to exist in this world to enter" and called it a "very justified decision." President Trump had pressed the government of Benjamin Netanyahu to make such a decision. The next day, Israeli authorities granted a request by Tlaib to visit her relatives in the Israeli-occupied West Bank on humanitarian grounds and under certain restrictions on political statements. But Tlaib declined to go, saying that she did not want to make the trip "under these oppressive conditions." The Israeli interior ministry stated that Tlaib had previously agreed to abide by any rules the government set in exchange for being permitted to visit the country and accused her of making a "provocative request aimed at bashing the State of Israel".

Tlaib supports efforts to impeach President Trump. In August 2016 she protested a speech Trump gave at Cobo Center and was ejected from the venue. On her first day in Congress, January 3, 2019, she called for the impeachment of Trump in an op-ed article co-authored with John Bonifaz for the Detroit Free Press. In the op-ed Tlaib differs from top Democratic leaders on how to move forward with impeachment: "Those who say we must wait for Special Counsel Mueller to complete his criminal investigation before Congress can start any impeachment proceedings ignore this crucial distinction [referring to Congressional powers of impeachment]."

Later that day Tlaib attended a reception for the MoveOn campaign and spoke on stage. She ended the speech recounting a conversation she had with her son, him saying: "Look, mama, you won. Bullies don't win." Tlaib replied to him, she recounted, "Baby, they don't, because we're gonna go in there and impeach the motherfucker." The next day at a White House press conference, Trump said, "Well, you can't impeach somebody that's doing a great job... I think she dishonored herself and I think she dishonored her family. I thought it was highly disrespectful to the United States of America."

In a radio interview with Mehdi Hasan of The Intercept, Tlaib reiterated her frequent call for Trump's impeachment, saying, "Look, it's not a waste of time to hold the president of the United States accountable... We need to understand our duties as members of Congress and I believe looking at even Nixon's impeachment, or his—literally, his resignation, it was Republicans and Democrats coming together and putting country first, coming together and putting our values first. You're seeing it now more and more. Even now, they're standing up to Steve King."

In 1998, at the age of 22, Tlaib married Fayez Tlaib. They have two sons, Adam and Yousif. The couple have since divorced. In 2018 a campaign spokesperson referred to Tlaib as a single mother.

In September 2018, The New York Times reported that Tlaib walked into her family's mosque to express her gratitude for the opportunity to run for Congress by saying "Today I was being thankful, embracing how incredibly blessed I am to grow up here, to have this tremendous opportunity...Sometimes I say 'Thank her' because my Allah is She." The Detroit Free Press reported that, although she recognizes that some in her faith community consider her not "Muslim enough", she believes that "Allah ... understands" and "knows that I am ... giving back and doing things that I think are reflective of Islam".

Over 1,000 DNC delegates voted against party platform, in sign of Dem discord
Politics
2607
View all