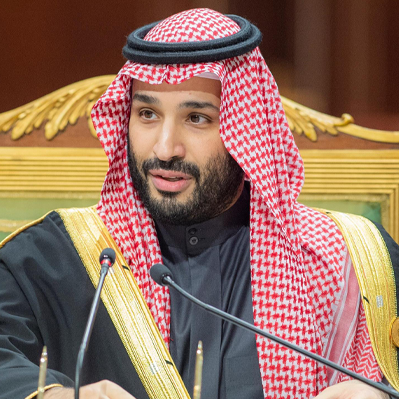 Mohammed bin Salman Al Saud is a Saudi Arabian politician who is the crown prince, deputy prime minister, and minister of defense of Saudi Arabia. He also serves as the chairman of the Council of Economic and Development Affairs and chairman of the Council of Political and Security Affairs. He is the seventh son of King Salman bin Abdulaziz and the eldest of six sons born to King Salman's third wife, Fahda bint Falah Al Hithlain. Mohammed bin Salman controls his father's government and is considered the de facto ruler of Saudi Arabia. In June 2017 King Salman removed his nephew Muhammad bin Nayef from the position of crown prince and appointed Mohammed bin Salman in his place.

Bin Salman rules an authoritarian regime. There are no democratic institutions in Saudi Arabia, and elements of repression are still evident. Human rights activists, women's rights activists, journalists, former insiders, and dissidents are systematically repressed through tactics including torture, jailing, and killings, and bin Salman is said to use a group of assassins known as the Tiger Squad to carry out extrajudicial killings. He was personally linked to the assassination of Jamal Khashoggi, a Saudi Arabian Washington Post columnist who had criticised the Saudi government, but he has denied involvement in the killing. Bin Salman was behind the Saudi bombing campaign in Yemen which has exacerbated the humanitarian crisis and famine there. His government has overseen a crackdown on feminists. Bin Salman was also involved in the escalation of the Qatar diplomatic crisis, the detention of Lebanese Prime Minister Saad Hariri, the start of a diplomatic spat with Canada, the arrest of Saudi princes and billionaires in November 2017, the alleged phone hack against Amazon chairman Jeff Bezos, and treason charges against his cousin and rival Muhammad bin Nayef in March 2020.

Bin Salman has touted reforms in an effort to rebrand his regime's image internationally and within the Kingdom. These include regulations restricting the powers of the religious police and improving women's rights, such as the removal of the ban on female drivers in June 2018 and weakening the male-guardianship system in August 2019. Other cultural developments under his reign include the first Saudi public concerts by a female singer, the first Saudi sports stadium to admit women, an increased presence of women in the workforce, and opening the country to international tourists by introducing an e-visa system, allowing foreign visas to be applied for and issued via the Internet. The Saudi Vision 2030 program aims to diversify the country's economy through investment in non-oil sectors including technology and tourism.