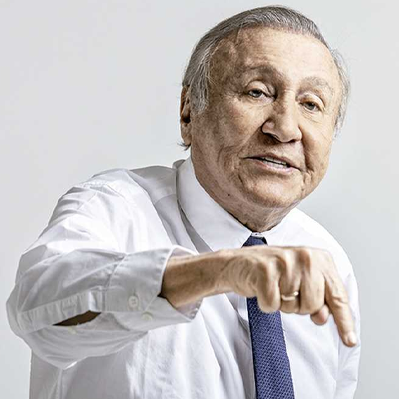 Rodolfo Hernández Suárez is a Colombian politician, civil engineer and businessman. He was mayor of Bucaramanga from 2016 until his resignation in 2019. He placed second in the first round of the 2022 Colombian presidential election and he was ultimately defeated by Gustavo Petro in the second round run-off election. He is the owner of the company Constructora HG.

Hernández does not claim to be on the right or the left, with NACLA describing his political position as a pragmatic centrist, Reuters describing him as centre-right, The New York Times describing him as right-wing, while other analysts have struggled to label him. Patricia Muñoz, a political analyst at Pontifical Xavierian University, evaluated Hernández political positions as syncretic, saying; “If you had to place him on an ideological spectrum, most would say he’s centre-right or right-wing, but when you look at his proposals, they’re eclectic.” He has been described as a populist and compared to Donald Trump and Silvio Berlusconi because he has emphasized his image as a successful businessman who can transform Colombia and often uses obscene language against the political establishment of his country.

Hernández declares that he is in favor of same-sex marriage, adoption of children by same-sex couples, legalization of medical and recreational marijuana, euthanasia and assisted suicide. Regarding abortion, he assures that in an eventual government of his the right to abortion will be totally respected and affirms that “it is the woman's decision whether to have an abortion or not”. He supports: lowering the value-added tax from 19% to 10%; a basic income for all senior citizens regardless of past contributions or lack thereof, and potentially those near or below the poverty line. He also supports: progressively writing off debt for students in the lower classes, known as estrato 1 and 2, while also including active students, and those with the best grades. He has pledged increased access to higher education in the regions; universal health care; switching from a punitive to a rehabilitative attitude towards drug addiction; granting Olympians and world record holders from Colombia state pensions; increasing social payments for successful sportspeople to up to 100,000 pesos per day; a 50% quota for women in public service and the presidential cabinet; welfare payments for those that maintain and take care of forested areas; as well as limiting fracking unless it meets environmental conditions. Regarding the Colombian peace process, he has stated that he will fully implement the FARC peace deal and has expressed willingness to add an addendum to the FARC peace deal to include the National Liberation Army. He is in favour of restoring consular relations with Venezuela to address the violence on the border, saying; “Consular relations are necessary for good circulation, both commercial and touristic, and also because the border is where the increase in violence that Colombia is experiencing is also most felt.”