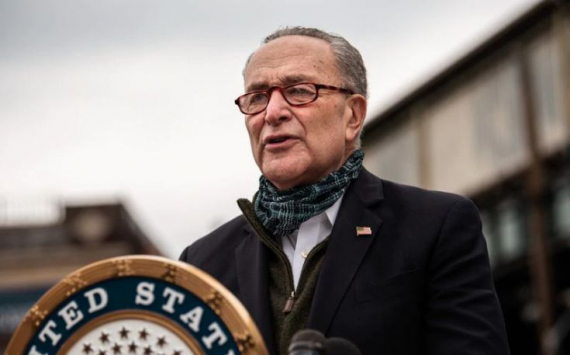 White House: Democrats near $400 billion deal on next round of coronavirus rescue funding

The White House and Democrats in Congress said Sunday they’re nearing a deal on more than $400 billion in new spending to help Americans weather the economic chaos wrought by the coronavirus outbreak.

“We’ve made very good progress, you have got a lot of details, a lot of dotted Is and crossed Ts ... I am very, very hopeful.” - Senate Minority Leader Chuck Schumer (D-N.Y.) said on CNN.

The deal reportedly includes $360 billion for loans for small businesses, a major priority for both Democrats and Republicans since a first installment of loans ran out earlier this month, and $75 billion for hospitals and $25 billion for testing, which Dems have been seeking.

Conspicuously absent from the burgeoning deal were any funds for cities and states, which are expecting massive hits in tax revenue as the outbreak inflicts millions of job losses.

Schumer, House Speaker Nancy Pelosi (D-Calif.) and Treasury Secretary Steven Mnuchin have been in “constant discussion” about the spending package, the senator said.

"I think we’re making a lot of progress, I’m hopeful that we can reach an agreement, that the Senate can pass this tomorrow, and that the House can take it up on Tuesday, and, Wednesday, we’d be back up and running”, -  Mnuchin said on CNN.

Pelosi said lawmakers’ ability to pass three spending bills to address the outbreak so far gave her confidence a fourth one would work out.

“We have a template. We’ve done it [before]. We can do it again,” she said on ABC News.

Last month, President Trump signed a $2 trillion stimulus package including $349 billion in loans for small businesses, billions of dollars in additional loans for big businesses such as airlines, $100 billion for hospitals and one-time checks worth up to $1,200 per individual.

Since then, Gov. Cuomo, Mayor de Blasio and leaders throughout the country have clamored for aid for local governments.

But Mnuchin reportedly told Republican leaders Sunday such funds wouldn’t be in the new deal.