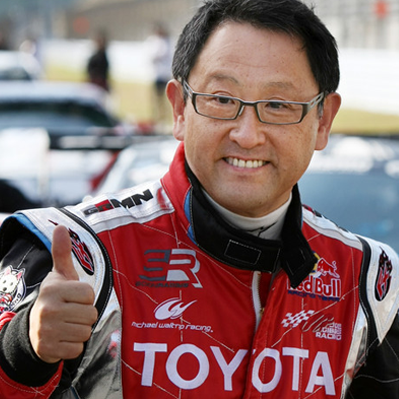 Toyoda is the great-grandson of the founder of Toyoda Automatic Loomworks, Sakichi Toyoda, and grandson of Toyota Motor Corporation founder Kiichiro Toyoda. He was born 3 May 1956, in Nagoya to Shoichiro Toyoda and Hiroko née Mitsui. Toyoda's family line have long dominated the upper management of the family businesses since the days his carpenter-farmer great-great-grandfather, Ikichi Toyoda, taught his son fabrication and carpentry. Akio Toyoda was the chief contender for the family business when Katsuaki Watanabe was reassigned as Vice-Chairman in the wake of the quality control crisis.

As grandson of the company's founder, Toyoda joined Toyota's board of directors in 2000. In 2005, Toyoda was promoted to the position of executive vice president. In January 2009, it was announced that Toyoda was chosen as the forthcoming president of the company. On 23 June 2009, he was confirmed as the new president, along with four new executive vice presidents and eight new board members. The previous president and CEO Katsuaki Watanabe became vice chairman, replacing Katsuhiro Nakagawa.

As an avid auto racing fan and driver himself, Toyoda has promoted sports models like the Lexus IS-F and Lexus LF-A at auto races. He has participated as a driver at events like the 2009 24 Hours Nürburgring race employing the pseudonym Morizo Kinoshita. In 2009, he reached the 87th position overall and the fourth position in his class with his LF-A Prototype No. 14.