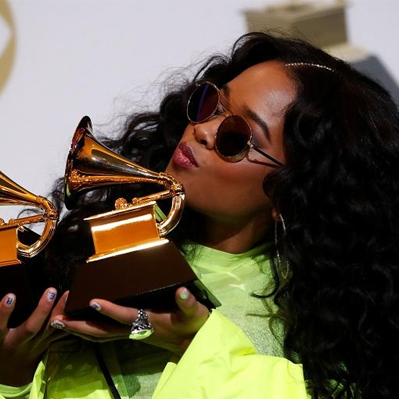 Gabriella Sarmiento Wilson known professionally as H.E.R. (pronounced "her", an acronym for "Having Everything Revealed"), is an American singer and songwriter. After initial music appearances and singles under her real name, Wilson re-emerged in 2016 as H.E.R., releasing her debut EP H.E.R. Volume 1 under RCA, followed by four subsequent EPs. Her first compilation album H.E.R. (2017), consisting of tracks from her first two EPs plus six additional songs, was nominated for five Grammy Awards, winning Best R&B Performance and Best R&B Album.

H.E.R. is featured in an episode of the 10-part animated series We the People on Netflix. Wilson wrote and performed the song "Change" for the "Active Citizenship" episode.

Gabriella Sarmiento Wilson was born in Vallejo, California to a Filipina American mother and an African American father. Raised in California's San Francisco Bay Area, performing as Gabi Wilson, she performed as a child such as playing an Alicia Keys song on the piano for Today Show at ten years old. She appeared at the famed Apollo Theater in NYC on September 23, 2007, covering Aretha Franklin's "Freeway Of Love". She made her acting debut at the age of nine, starring in the Nickelodeon TV film School Gyrls. She also performed on Maury in 2007, Good Morning America, and The View in 2008. At this time, she was managed by Will Smith's Overbrook Entertainment. She performed at the 2010 BET Awards covering Keys' "Fallin'", sung a tribute to Keys at the ASCAP Awards, and competed on Radio Disney's The Next BIG Thing at age 12, with her song "My Music" featured on Radio Disney.

In 2011, at age 14, Wilson signed a record deal with Sony's RCA Records via J Records, in a deal arranged by her manager Jeff Robinson's MBK Entertainment. Her debut single "Something to Prove" was released under her real name.

NPR listed H.E.R. Vol. 1 as the first selection in its "5 Essential R&B Albums You Slept On". Calling the music "Slow-burning R&B that zooms in on emotional highs and lows," Rolling Stone included H.E.R. in its March 2017 "10 Artists You Need To Know" roundup. Forbes named her one of "5 Alternative R&B Artists to Look Out for in 2017", reporting: "In the same vein as The Weeknd's enigmatic introduction to the world, H.E.R.'s image remains a mystery. The irony, though, is that her moniker is an acronym for Having Everything Revealed."

On September 20, 2020, she sang Prince's song "Nothing Compares 2 U" for the In Memoriam segment of the 72nd Primetime Emmy Awards. In February 2021, during the pre-game festivities for Super Bowl LV, she performed "America the Beautiful", singing and playing guitar. She appeared as herself in the movie Yes Day (2021).On June 17, 2021, her single "Damage" topped the US R&B radio chart. The song is from her debut full-length album 'Back of My Mind', which was released on June 18, 2021.

In August 2021, it was announced that Wilson was in final negotiations to make her feature film debut in the upcoming film adaptation of The Color Purple, playing the role of Squeak. She also sings a duet with Tauren Wells on the song called Hold Us Together.