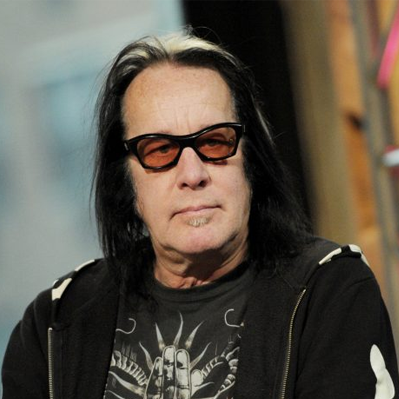 Todd Harry Rundgren is an American multi-instrumentalist, singer, songwriter, and record producer who has performed a diverse range of styles as a solo artist and as a member of the band Utopia. He is known for his sophisticated and often unorthodox music, his occasionally lavish stage shows, and his later experiments with interactive entertainment. He also produced music videos and was an early adopter and promoter of various computer technologies, such as using the Internet as a means of music distribution in the late 1990s.

A native of Philadelphia, Rundgren began his professional career in the mid 1960s, forming the psychedelic band Nazz in 1967. Two years later, he left Nazz to pursue a solo career and immediately scored his first US top 40 hit with "We Gotta Get You a Woman" (1970). His best-known songs include "Hello It's Me" and "I Saw the Light" from Something/Anything? (1972), which get frequent air time on classic rock radio stations, and the 1983 single "Bang the Drum All Day", which is featured in many sports arenas, commercials, and movie trailers. Although lesser known, "Couldn't I Just Tell You" (1972) was influential to many artists in the power pop genre. His 1973 album A Wizard, a True Star remains an influence on later generations of bedroom musicians.

Rundgren is considered a pioneer in the fields of electronic music, progressive rock, music videos, computer software, and Internet music delivery. He organized the first interactive television concert in 1978, designed the first color graphics tablet in 1980, and created the first interactive album, No World Order, in 1994. Additionally, he was one of the first acts to be prominent as both an artist and producer. His notable production credits include Badfinger's Straight Up (1971), Grand Funk Railroad's We're an American Band (1973), the New York Dolls' New York Dolls (1973), Meat Loaf's Bat Out of Hell (1977), and XTC's Skylarking (1986). He will be inducted into the Rock and Roll Hall of Fame in 2021.