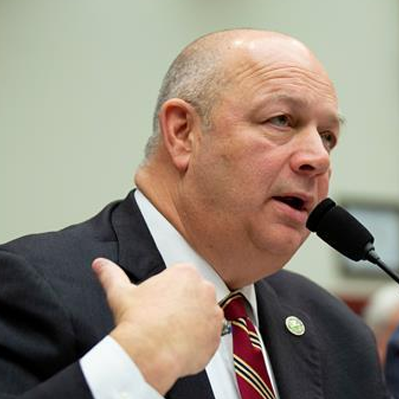 Administrator of the Federal Aviation Administration

Stephen Marshall Dickson is an American former Air Force pilot and Delta Air Lines executive who currently serves as the Administrator of the Federal Aviation Administration.

Prior to Dickson's appointment to the Department of Transportation, he spent 27 years at Delta, first as a pilot and later overseeing pilots as the senior vice president of flight operations until he retired. In March 2019, President Donald Trump nominated Dickson to be Administrator of the Federal Aviation Administration and the Chairman of the Air Traffic Services Committee. On July 27, the United States Senate confirmed Dickson in a 52–40 vote. He was sworn in as Administrator by Transportation Secretary Elaine Chao on August 12, 2019.

Before moving to the Federal Aviation Administration, Stephen Dickson retired from service as the Senior Vice President-Flight Operations for Delta Air Lines. In this role, he was responsible for the safety and operational performance of Delta's global flight operations, as well as pilot training, crew resources, crew scheduling, and regulatory compliance. He also flew in line operations as an Airbus A320 captain, and previously flew the Boeing 727, 737, 757, and 767 during his career. Dickson is a strong advocate for commercial aviation safety and improvements to the US National Airspace System, having served as chairman of several industry stakeholder groups and Federal advisory committees.

After retiring from Delta, Dickson was nominated by President Trump to be the Administrator of the Federal Aviation Administration prior to 15 May. He was confirmed in the Senate Commerce Committee by a 14–12 vote on July 10, 2019, to lead an outfit which had been without a permanent head since January 2018. He was confirmed by a 52–40 vote of the full Senate on July 24, and replaced Acting Administrator Daniel Elwell in the midst of the Boeing 737 MAX groundings.

Administrator of the Federal Aviation Administration

Dickson's first action as the Administrator of the FAA was inviting pilots for simulator tests of the Boeing 737 MAX, which was announced on August 22, 2019. On September 18 the same year, Dickson announced that he would only re-certify the MAX once he flew the aircraft himself to test the new software. He completed the test flight on September 30, 2020, saying that the aircraft responded well, although the FAA was not yet ready to re-certify it.

In November 2019 the FAA revoked Boeing's authority to issue airworthiness certificates for each new individual 737 MAX aircraft. This authority had previously been held under the Organization Designation Authorization. The FAA reiterated that the aircraft was not ready for re-certification.

Blackstone
4 Persons
GlobalNY.biz pays special attention to the activities of famous people: politicians, officials, businessmen, bankers, cultural and sports figures. Their opinion largely determines the development of political, social and economic life in New York. The section is constantly edited by our journalists for the relevance of information. Here you can find information about CEOs and presidents of top New York companies, officials and public figures who play a key role in the development of the region.
The goal of the project is to create a comfortable information space for all market actors, as well as to acquaint the readership with business people in New York.
We have created an impressive database of people in New York, which contains information about a career path, education and other important information about a person.
Thanks to automatic counting of the number of mentions of a person in the news sections " New York News ”and“ New York Press Releases ”on the portal the rating of popularity and influence of persons is formed. The GlobalNY.biz team monitors rating changes and rewards project participants for their success. In general, the rating of participants is based on an in-depth analysis of the activity of PR services of famous people, and also reflects the qualitative state of the information field formed by the media and press services around the organization.
Business People of New York is a project about people who, through their ideas, words and deeds, have a great influence on the development and prosperity of New York.
Alena Potapova
Development Director
Subscribe to the person
Press Releases
All