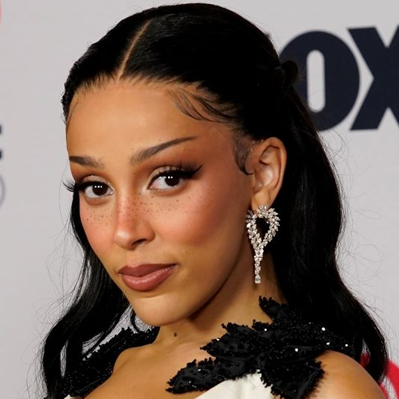 Amala Ratna Zandile Dlamini known professionally as Doja Cat, is an American rapper, singer and songwriter. Born and raised in Los Angeles, she began making and releasing music on SoundCloud as a teenager. Her song "So High" caught the attention of Kemosabe and RCA Records, with which she signed a joint record deal at the age of 17, subsequently releasing her debut EP Purrr! in 2014.

After a hiatus from commercial music and the uneventful release of her debut studio album, Amala (2018), Doja Cat earned viral success as an internet meme with her 2018 single "Mooo!", a novelty song in which she fantasizes about being a cow. Her second studio album, Hot Pink (2019), reached the top 10 of the US Billboard 200 and spawned the single "Say So", which topped the Billboard Hot 100 chart following the release of a remix featuring Nicki Minaj. This album was followed by Planet Her (2021), which spent three consecutive weeks at number 2 on the Billboard 200 and spawned the top 20 singles "Kiss Me More" (featuring SZA), "Need to Know" and "You Right" (with the Weeknd).

Described by The Wall Street Journal as "a skilled technical rapper with a strong melodic sense and a bold visual presence", Doja Cat is known for creating music videos and songs that achieve popularity on social media applications such as TikTok and YouTube. She is also well-versed in the internet herself, and is famed for her absurdly humorous personality and online presence. She has received numerous accolades throughout her career, including nominations for three Grammy Awards and six Billboard Music Awards, having won two American Music Awards in addition to the MTV Video Music Award for Push Best New Artist and its European counterpart.

Amala Ratna Zandile Dlamini was born on October 21, 1995, into an artistic family in the Tarzana neighborhood of Los Angeles, California. Her mother is a Jewish-American painter. Her father, Dumisani Dlamini, is a South African actor, composer, and film producer of Zulu descent best known for starring in the 1992 musical film Sarafina!. According to Doja Cat, she never met her father growing up. Her father has denied this claim, stating that he has a "healthy" relationship with his daughter.

Soon after her birth, Dlamini and her mother moved to New York City, where they lived for five years. Her family later moved back to California in Oak Park, where her mother enrolled her in ballet, tap and jazz lessons from the age of five. Her aunt, a singer, gave Dlamini singing lessons to help her get into a performing arts school. Her family then moved near the Sherman Oaks neighborhood of Los Angeles when she was 11 years old, where they lived in an ashram in the mountains of Agoura Hills and practiced Hinduism for four years. It was here that Dlamini wore head-covering scarves and sang bhajans at temple, and American jazz musician Alice Coltrane (under the Sanskrit name Turiyasangitananda) was the swami. She claims that she lacked interest in school from then on, instead taking a liking for dance. While at the ashram she had been dancing the style of Indian classical dance called Bharatanatyam. As she grew older and moved away from the ashram, she moved onto breakdancing classes and joined a professional poplocking troupe with whom she competed in dance battles throughout Los Angeles while still attending high school. She also frequently skipped school to participate in online chatrooms. She eventually dropped out of high school at age 16 while in her junior year.

Doja Cat has stated that she "like both. I like dicks and I also like, um, I like people that I can have sex with. You can kind of have sex with anybody, right?" She has also alluded to her queer sexuality in the song "Naked" on which she raps that she "like bananas and peaches", yet she has not yet formally come out or made a definitive statement about her sexual orientation. In August 2019, she began dating indie pop musician Jawny, although the pair split up in February 2020. In July 2021, Doja Cat went out on a date in Los Angeles with British singer and rapper Bree Runway and tweeted "I have a girlfriend and I’m going public", yet it is not fully confirmed whether or not this statement was made in jest.

MTV Video Music Awards 2021: Performer of the year and best music video of the year
Business
2817
View all