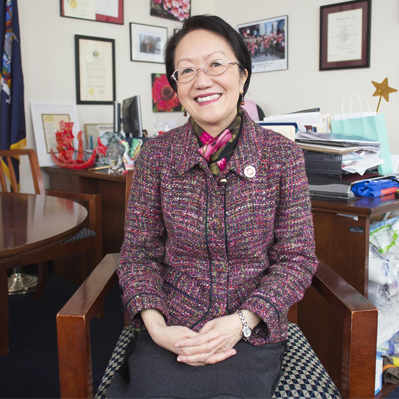 Margaret S. Chin is a Hong Kong American politician serving as a council member for the 1st District of the New York City Council. A Democrat, she and Queens Council member Peter Koo comprise the Asian American delegation of the city council.

Her district includes all or parts of Battery Park City, Chinatown, Civic Center, East Village, Ellis Island, Financial District, Governors Island, Greenwich Village, Liberty Island, Little Italy, Lower East Side, NoHo, Nolita, SoHo, Tribeca, and the West Village. Chin controversially retained the right to run a third term despite its unpopularity in 2010. Seven years later, she ran for re-election and won her primary with 46% of the vote against a newcomer, Christopher Marte, who received 44%. Her support for rebuilding a jail in her district was met with some of the fiercest opposition in the current anti-jails movement.

Born on May 26, 1954 in British Hong Kong as the third of five children and the only daughter in the family, Chin immigrated to the United States in 1963. Her father, who arrived to the U.S. before his family, was an undocumented worker, working as a waiter in the Bronx; his experiences inspired his daughter to advocate for immigration reform during her political tenure.

Chin grew up in Chinatown in New York City and graduated from the Bronx High School of Science and the City College of New York with a degree in education. She worked for 14 years at LaGuardia Community College's Division of Adult and Continuing Education.

She has been a member of several public service groups and organizations. In 1974, she was a founding member of Asian Americans for Equality, a group dedicated to "empowering Asian Americans and others in need", and she served as the board's president from 1982 to 1986. She was the chairperson of the New York Immigration Coalition, a policy and advocacy organization which works on issues concerning immigrants and refugees. She was a board member of the Association for Neighborhood and Housing Development, an affordable housing non-profit organization. Chin was also a founding member of the Chinatown Partnership Local Development Corporation, a group that was formed in 2006 to "rebuild Chinatown following 9/11, and to preserve the neighborhood's unique culture while ensuring its vitality in the future."

Chin has stated that her ethnicity helped her win the district that includes Chinatown. In her words, many new immigrants and seniors do not speak English, and appreciated that they could speak to her directly and "talk to a City Council member without having to go through an interpreter." Hunter College professor and sociologist Peter Kwong, who has written books on Chinese Americans, said that Chin's election victory at the time was a "milestone in an increasingly active Asian American community" and a "special moment in Chinatown history". Margaret Fung, head of Asian American Legal Defense and Education Fund, a national Asian American civil rights group, described her win as a "significant step forward for Asian American political representation".

Chin is married to Alan Tung, a public school teacher. Their son, Kevin, also graduated from the Bronx High School of Science. He completed his studies at Syracuse University, and is now studying photography in Santa Barbara, California. 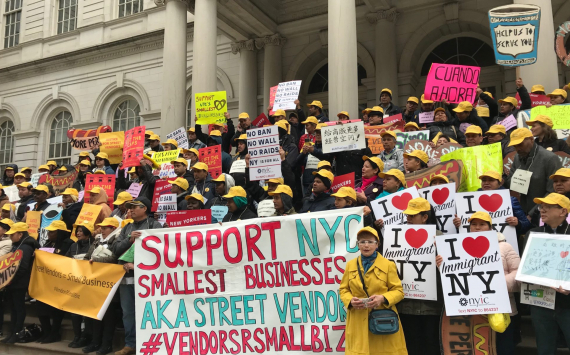