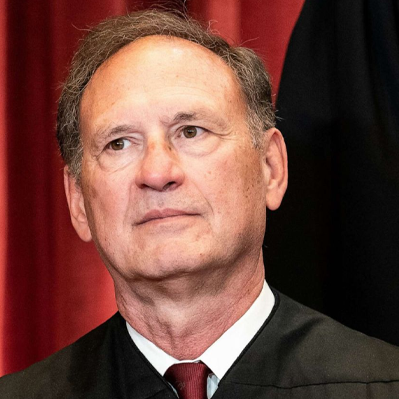 Samuel Anthony Alito Jr. is an American lawyer and jurist who serves as an associate justice of the Supreme Court of the United States. He was nominated by President George W. Bush on October 31, 2005, and has served since January 31, 2006. He is the second Italian American justice to serve on the U.S. Supreme Court—after Antonin Scalia—and the eleventh Catholic.

Raised in Hamilton Township, New Jersey, and educated at Princeton University and Yale Law School, Alito served as the U.S. Attorney for the District of New Jersey and a judge on the U.S. Court of Appeals for the Third Circuit (Philadelphia, Pennsylvania) before joining the Supreme Court. He is the 110th justice.

In 2013, Alito was considered "one of the most conservative justices on the Court". He has described himself as a "practical originalist". Alito's majority opinions in landmark cases include McDonald v. Chicago, Burwell v. Hobby Lobby, Murphy v. NCAA, Janus v. AFSCME, and Dobbs v. Jackson Women's Health Organization.

After graduating from law school, Alito clerked for Third Circuit appeals judge Leonard I. Garth in Newark, New Jersey in 1976 and 1977. He interviewed with Supreme Court Justice Byron White for a clerkship but was not hired. Between 1977 and 1981, Alito was Assistant United States Attorney, District of New Jersey. There he served under chief of the appeals division Assistant U.S. Attorney, later federal circuit judge, Maryanne Trump Barry. (Barry and Alito later served alongside each other as judges on the Third Circuit.) While an Assistant U.S. Attorney for New Jersey, he prosecuted many cases involving drug trafficking and organized crime.

From 1985 to 1987, Alito was Deputy Assistant Attorney General under Charles J. Cooper in the Office of Legal Counsel during the tenure of Attorney General Edwin Meese. John F. Manning worked under Alito there. Between 1986 and 1987, Alito authored nearly 470 pages of memoranda, in which he argued for expanding his client's law enforcement and personnel authorities. In his 1985 application for Deputy Assistant Attorney General, Alito espoused conservative views, naming William F. Buckley, Jr., the National Review, Alexander Bickel, and Barry Goldwater's 1964 presidential campaign as major influences. He also expressed concern about Warren Court decisions in the areas of criminal procedure, the Establishment Clause, and reapportionment.

From 1987 to 1990, Alito was the United States Attorney for the District of New Jersey. When he arrived, the office had begun the prosecution of 20 defendants accused of being mob affiliates of Anthony Accetturo. In August 1988, the two-year trial, then the longest federal criminal trial in history, ended in the acquittal of all 20 after less than two days of jury deliberations. Alito soon hired Michael Chertoff as his chief deputy.

After an FBI agent was shot in the line of duty in 1988, Alito personally handled the trial, assigning himself the then-novice Stuart Rabner as an assistant, and securing the shooter's conviction. In March 1988, Alito sought a rehearing of extradition proceedings against two Indian men, represented by Ron Kuby, who were accused of being terrorist assassins, after Alito discovered that the death threats his prosecutor had received had been sent to her by herself. The prosecutor was later found not guilty of obstruction of justice by reason of insanity, after psychiatrists found she was a possible schizophrenic with up to four distinct personalities. In 1989, Alito prosecuted a member of the Japanese Red Army for planning a terrorist bombing in Manhattan.

As adjunct professor at Seton Hall University School of Law in Newark from 1999 to 2004, Alito taught courses in constitutional law and an original course on terrorism and civil liberties. In 1995, he was presented with the school's Saint Thomas More Medal "in recognition of his outstanding contributions to the field of law". On May 25, 2007, he delivered the commencement address at Seton Hall Law's commencement ceremony and received an honorary law degree from the school.

Alito is a member of the Federalist Society, a group of conservatives and libertarian lawyers and legal students interested in conservative legal theory.

As a visiting professor at Duke University School of Law, Alito taught Current Issues in Constitutional Interpretation in fall 2011 and a course in the Master of Laws in Judicial Studies program in summer 2012.