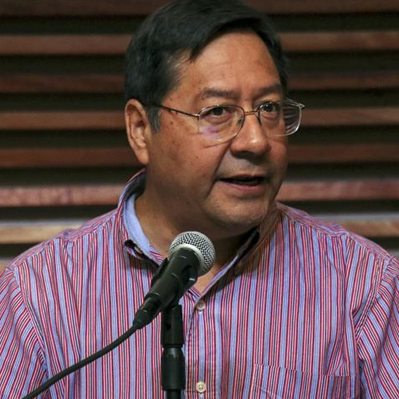 Luis Alberto Arce Catacora is a Bolivian banker, economist, and politician serving as the 67th president of Bolivia since 2020. A member of the Movement for Socialism, he previously served as minister of finance—later minister of economy and public finance—from 2006 to 2017, and in 2019.

Born in La Paz, Arce graduated as an economist at the University of Warwick. His lifelong career in banking and accounting at the Central Bank of Bolivia prompted President Evo Morales to appoint him as minister of finance in 2006. For over ten years as Morales' longest-serving minister, Arce was hailed as the architect behind Bolivia's economic transformation, overseeing the nationalization of the country's hydrocarbons industry, the rapid expansion of GDP, and the reduction of poverty. His tenure was only brought to an end by a diagnosis of kidney cancer, which forced him to leave office to seek extended treatment abroad. Upon his recovery, Arce was reappointed to his position in January 2019 but resigned from office within the year amid the social unrest the country faced in October and November, culminating in Morales' removal as president soon thereafter amid allegations of electoral fraud. During the interim government of Jeanine Áñez, Arce sought asylum in Mexico and Argentina, where Morales—barred from running again—nominated him as the Movement for Socialism's presidential candidate in the snap elections scheduled for 2020. Throughout the campaign, Arce characterized himself as a moderating force, a proponent of his party's socialist ideals but not subservient to its leader, Morales. These factors ultimately resulted in a substantial victory at the polls, with Arce winning fifty-five percent of the popular vote.

Inaugurated on 8 November 2020, Arce's presidency brought Bolivia back in line domestically and internationally with its traditional position under Morales and away from the rightward shift the Áñez government had taken. Domestically, Arce's first year in office saw its greatest successes in combating the COVID-19 pandemic through the procurement of vaccines from Russian and Chinese sources. His government spearheaded an international call for the pharmaceutical industry to waive its patents on vaccines and medications in order to provide greater access to them by low-income countries. Though he succeeded in stabilizing the economy in the face of the health crisis, Arce's ability to conduct its growth was hampered by a vaccine hesitant population, which prolonged the pandemic's economic ramifications. Among the biggest challenges of the Arce administration was the urgent need for judicial reform in the country, which he pledged to address but was forced to delay on multiple occasions.