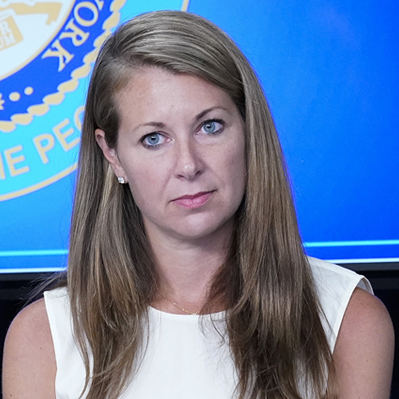 former Secretary to the Governor of the State of New York

Melissa DeRosa is the former Secretary to the Governor of the State of New York, Andrew Cuomo.

Derosa was raised in Albany and Saratoga Springs, New York. At 16, she was an intern for the political director of the New York State AFL-CIO.

DeRosa attended Cornell University, graduating in 2004 from the Cornell University School of Industrial and Labor Relations. While an undergraduate student at Cornell, she worked in the Senate office of Hillary Clinton in Washington, D.C. during a summer. After graduation, she worked for a year as a publicist for Theory, a fashion house in New York. She then worked as a lobbyist for Bolton-St. Johns, where her father, Giorgio DeRosa, is a partner. In 2009, she completed an MPA from the Cornell Institute for Public Affairs.

DeRosa has worked as the New York state director of Barack Obama's PAC, Organizing for America, and has worked as the director of communications and legislation for the Albany-based lobbying firm Cordo and Company. In 2011, she became deputy chief of staff and acting chief of staff for New York State Attorney General Eric Schneiderman. In March 2013, she became director of communications for Governor Andrew Cuomo, later becoming strategic adviser, and in 2015 was appointed Chief of Staff.

In 2017, she became the Secretary to the Governor and became one of his closest advisers. The Secretary to the Governor has been described by The New York Times as the most powerful appointed official in the state, and she is the first woman to have been appointed to the role. She has helped steer bills through the legislature, including the $15 minimum wage, paid family leave and expanded insurance coverage for in vitro fertilization.

She is also the chair of the New York State Council on Women and Girls and head of the Covid-19 maternity task force, and in 2017, she spoke publicly about her experience with sexual harassment and encouraged women to "speak up and speak out."

During the COVID-19 pandemic, she had a major role in coordination and management of the New York response. DeRosa is said to have been part of an alleged effort to prevent state officials from releasing the true total of nursing home deaths related to COVID-19, while her efforts have been described by an attorney for the governor's office as an attempt to ensure accurate information was available before it was released.

DeRosa is also alleged to have had a significant role in efforts to discredit a woman who has accused Cuomo of sexual harassment, while an attorney for DeRosa has stated she acted after obtaining advice from legal counsel. DeRosa resigned as Secretary to the Governor on August 8, 2021.

In 2016 she married Matthew Wing, an Uber executive. They met in 2013 when both worked for Governor Cuomo. Her father is Georgio DeRosa, an Albany based lobbyist. Her mother-in-law is Audrey Strauss, United States Attorney for the Southern District of New York. 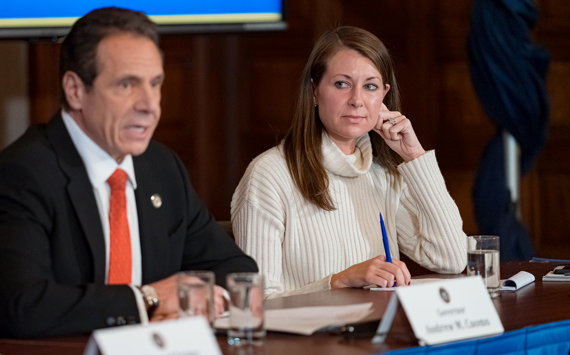 United States
4 Persons
GlobalNY.biz pays special attention to the activities of famous people: politicians, officials, businessmen, bankers, cultural and sports figures. Their opinion largely determines the development of political, social and economic life in New York. The section is constantly edited by our journalists for the relevance of information. Here you can find information about CEOs and presidents of top New York companies, officials and public figures who play a key role in the development of the region.
The goal of the project is to create a comfortable information space for all market actors, as well as to acquaint the readership with business people in New York.
We have created an impressive database of people in New York, which contains information about a career path, education and other important information about a person.
Thanks to automatic counting of the number of mentions of a person in the news sections " New York News ”and“ New York Press Releases ”on the portal the rating of popularity and influence of persons is formed. The GlobalNY.biz team monitors rating changes and rewards project participants for their success. In general, the rating of participants is based on an in-depth analysis of the activity of PR services of famous people, and also reflects the qualitative state of the information field formed by the media and press services around the organization.
Business People of New York is a project about people who, through their ideas, words and deeds, have a great influence on the development and prosperity of New York.
Alena Potapova
Development Director
Subscribe to the person
Press Releases
All