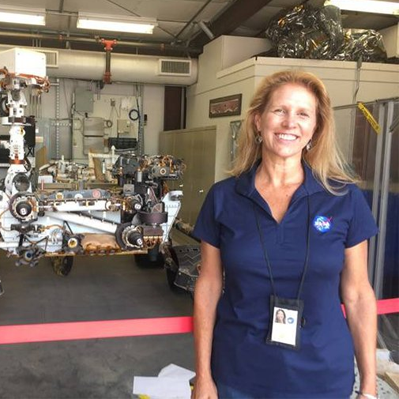 Director at the NASA

Lori Glaze is an American scientist and the Director of NASA's Science Mission Directorate's Planetary Science Division. She was a member of the Inner Planets Panel during the most recent Planetary Science Decadal Survey, and has had a role on the Executive Committee of NASA's Venus Exploration Analysis Group (VEXAG) for several years, serving as the group's Chair since 2013.

Glaze has been an advocate for women in science and for the importance of understanding Venus in our quest to better understand Earth. Glaze has more than 15 years of scientific management experience, including over ten years as the Vice President of Proxemy Research, Inc. She also spent three years as Associate Laboratory Chief and three years as Deputy Director in the Solar System Exploration Division at NASA's Goddard Space Flight Center.

Glaze was the Principal Investigator for a proposed NASA Discovery mission to Venus, Deep Atmosphere Venus Investigation of Noble gases, Chemistry, and Imaging (DAVINCI). This mission would send a probe on a journey through Venus' atmosphere, descending over the planet's roughest and most geologically complex terrain. The DAVINCI probe would explore the planet's atmosphere from top to bottom, including the deep atmospheric layers largely hidden from Earth-based instruments and orbiting spacecraft. DAVINCI would be the first U.S. probe in nearly four decades to target Venus' atmosphere.

Glaze is married to former Pantera and Lord Tracy singer and frontman Terry Glaze. They have two daughters.

BALARAM Bob
Member of Technical Staff at the NASA
1 place