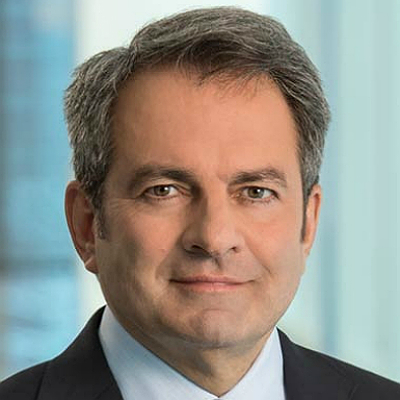 Michel Vounatsos is the Chief Executive Officer at Biogen Inc. He has been Executive Vice President and Chief Commercial Officer of Biogen Inc.

Mr. Vounatsos succeeds George A. Scangos, who has led the company since 2010 and had previously announced that he would step down once a successor was found. Τhe U.S. Food and Drug Administration approved Biogen’s new drug Spinraza, the first drug approved to treat children and adults with spinal muscular atrophy (SMA). Biogen is also developing its promising Alzheimer’s drug candidate, called aducanumab.

Michel Vounatsos is a French national of Greek extraction who was born and raised in Morocco. He is a sophisticated global business leader who has a track record of commercial success and creativity. He joined Biogen in 2016 as Executive Vice President and Chief Commercial Officer after a 20 career at Merck. While at Merck, he held leadership positions of increasing responsibility in Europe, China, and the U.S. driving significant and consistent growth across multiple geographies.

Most recently, he served as President, Primary Care Business Line and Merck Customer Centricity leading Merck’s global primary care business unit, and developed and instituted a strategic framework for enhancing the company’s relationships with key constituents, including providers, payers and retailers and governmental bodies throughout the world. Earlier in his career, Michel held management positions at Ciba-Geigy.

He received his C.S.C.T. certificate in Medicine from the Université de Bordeaux, in France, and his M.B.A. (Master in Business Administration) from the HEC School of Management in Paris.

Biogen
Biogen Inc. is an American multinational biotechnology company based in Cambridge, Massachusetts, specializing in the discovery, development, and delivery of therapies for the...
Person in rating
All