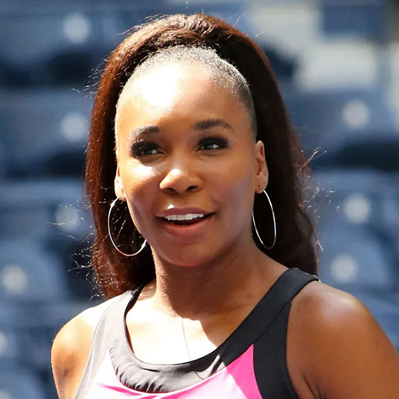 Venus Ebony Starr Williams is an American professional tennis player. A former world No. 1 in both singles and doubles, Williams is widely regarded as one of the all-time greats of the sport of tennis. Along with younger sister Serena Williams, she is credited with ushering in a new era of power and athleticism on the women's professional tennis tour.

Williams has been ranked world No. 1 by the Women's Tennis Association for a total of 19 weeks (11 in singles and 8 in doubles). She first reached the No. 1 ranking in singles on February 25, 2002, becoming the first African American woman to do so in the Open Era, and the second all time since Althea Gibson. She became the world No. 1 in doubles for the first time on June 7, 2010, alongside Serena, after the pair won their fourth consecutive Grand Slam doubles crown. Williams's seven Grand Slam singles titles are tied for 12th on the all-time list, and 8th on the Open Era list, more than any other active female player except her sister. She has reached 16 Grand Slam finals, most recently at Wimbledon in 2017. Her five Wimbledon singles titles tie her with two other women for eighth place on the all-time list. She is No. 4 on the Open Era List, behind the nine titles of Martina Navratilova and the seven of Serena Williams and Steffi Graf. From the 2000 Wimbledon Championships to the 2001 US Open, Williams won four of the six Grand Slam singles tournaments. At the 2021 Wimbledon Championships, Williams extended her record as the all-time leader, male or female, in Grand Slams played, with 90. With her run to the 2017 Wimbledon singles final, she broke the record for longest time between first and most recent grand slam singles finals appearances. Williams was twice the season prize money leader in 2001 and 2017, and currently ranks second behind Serena in career prize money earned with over $41.8 million. She has also won 14 Grand Slam Women's doubles titles, all with Serena Williams; the pair is unbeaten in Grand Slam doubles finals. Williams also has two Mixed Doubles titles.

Williams has won four Olympic gold medals, one in singles and three in women's doubles with her sister, along with a silver medal in mixed doubles, tying her with Kathleen McKane Godfree for the most Olympic medals won by a male or female tennis player in history. At the 2000 Sydney Olympics, Williams became only the second player to win Olympic gold medals in both singles and doubles at one Olympic Games, after Helen Wills Moody at the 1924 Summer Olympics (she was followed by her sister in 2012). After winning silver in mixed doubles with Rajeev Ram at the 2016 Rio de Janeiro Olympics, Williams became the first tennis player to win a medal at four Olympic games, as well as the first player in the Open Era to win an Olympic medal in all three events (singles, doubles, mixed). She and Serena are also the only tennis players in history with four Olympic gold medals, as well as the only ones to win Olympic gold in the same event on three occasions. She along with her sister Serena are the only Open Era female tennis players to win Olympic Gold in both singles and doubles category.

With 49 WTA singles titles, Williams trails only her sister Serena Williams among active players on the WTA Tour with most singles titles. Along with her 22 WTA doubles titles and two mixed doubles titles, Venus' combined total of 73 WTA titles is also second among active players behind Serena. Her 35-match winning streak from the 2000 Wimbledon Championships to the 2000 Generali Ladies Linz tournament final is the longest since January 1, 2000. She is also one of only two active WTA players to have reached the finals of all four Grand Slams, along with sister Serena.

Williams was born in Lynwood, California, to Richard Williams and Oracene Price. Her talents were apparent at the age of seven when a professional local tennis player named Tony Chesta spotted Williams and quickly identified her potential in the sport.

The Williams family moved from Compton, California, to West Palm Beach, Florida, when she was ten, so that she and her sister Serena could attend the tennis academy of Rick Macci, who took notice of the sisters and who would provide additional coaching. He did not always agree with Williams' father but respected that "he treated his daughters like kids, allowed them to be little girls". Richard stopped sending his daughters to national junior tennis tournaments when Williams was eleven, since he wanted them to take it slowly and focus on schoolwork. Another motivation was racial, as he had allegedly heard parents of other players disparage the Williams sisters during tournaments. At that time, Williams held a 63–0 record on the United States Tennis Association junior tour and was ranked No. 1 among the under-12 players in Southern California. In 1995, Richard pulled his daughters out of Macci's academy, and from then on took over all coaching at their home.

Williams is an aggressive player, with an all-court game. Due to her assertive playing style, she typically accumulates large numbers of both winners and unforced errors. She possesses powerful groundstrokes on both sides, and is capable of hitting both her forehand and backhand flat, and with topspin. She is also adept at hitting her backhand with slice, to slow down rallies and disrupt pace within rallies. Her serve is powerful, allowing her to serve numerous aces in any match. At the peak of her career, her first serve would average 113 mph (182 km/h), and would frequently peak at 124 mph (199 km/h); her serve has slowed since then, averaging 107 mph (172 km/h), and peaking at 117 mph (189 km/h). She possesses effective kick and slice serves, which she deploys as second serves, preventing opponents from scoring free points. Up to 2014, she held the record for the fastest serve on the WTA Tour, recorded at the 2007 US Open, at 129 mph (208 km/h). She likes to approach the net, and finish points quickly. Her height, at 6 ft 1 in (1.85 m), provides her with a long arm span, allowing her to reach any ball while positioned at the net. She has a complete repertoire of shots to perform at the net, allowing her to hit deft volleys with ease.

Due to her all-court game, Williams can hit winners from any position. An exceptional tactical player with remarkable problem-solving skills, she also plays with sheer power and aggression. She relies on defense infrequently, rarely hitting drop shots and lobs, as her exceptional speed and court coverage allow her to hit with assertive power and strength from frequently defensive positions. Further strengths include her detailed and intricate footwork, and supreme athleticism. She has been noted for her elegant style of play, and she prefers to play on fast grass, hard, and carpet courts.

CODA: Child of Deaf Adult wins a major award from the Screen Actors Guild of America
Culture
2507
View all