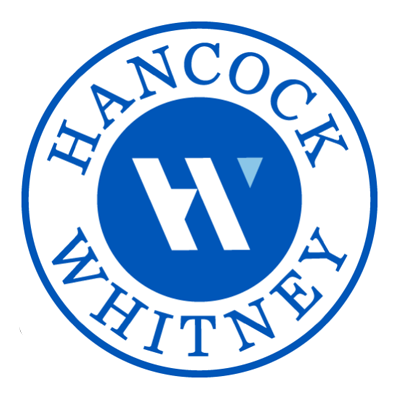 Hancock County Bank was founded in 1899 in Bay Saint Louis, Mississippi by 19 individuals. On its first day, the bank opened with $10,000 in capital and $8,277.41 in deposits. The bank was originally founded to capitalize on the booming lumber, cotton, and wool trades and also the market for poultry and produce.

On January 8, 1902, the bank opened a branch in Pearlington, Mississippi, followed by a branch in Pass Christian, Mississippi, the popular destination of Northerners fleeing the brutal winters, and of affluent New Orleanians seeking relief from the sweltering heat of the summers.

The Pearlington and Logtown branches were closed after the decline of the lumber industry and the company turned its attention toward Gulfport, Mississippi and Biloxi, Mississippi.

During the Wall Street Crash of 1929, 162 Mississippi banks failed, leaving Gulfport without a bank. Some Gulfport residents were already customers at the Long Beach, Mississippi branch and several Gulfport businessmen appealed to the bank to open a downtown Gulfport branch. The bank opened a branch at the corner of 13th Street and 26th Avenue in the former First National Bank of Gulfport Building. In 1933, the bank moved to the location that would become One Hancock Plaza in downtown Gulfport, and the company changed its domicile to Gulfport and renamed the company Hancock Bank.

In 1994, the bank acquired Washington Bank and Trust Co. of Franklinton, Louisiana for $15 million.

In 2001, the bank acquired Lamar Bank opening up the south-central Mississippi marketplace and establishing a presence in Hattiesburg, Mississippi.

In March 2004, the bank acquired Tallahassee, Florida-based Guaranty National Bank and its 5 branches.

In September 2006, Hancock Bank of Alabama was issued a charter to operate in Alabama.

In December 2009, the bank acquired Peoples First Bank of Panama City, Florida after it was seized by the Office of Thrift Supervision after suffering from bank failure.

In April 2017, the bank acquired First NBC Bank, which was seized by regulators after suffering from bank failure.

In May 2018, the company changed its name to Hancock Whitney Corp.

In July 2018, Hancock Whitney acquired the Trust and Asset Management business from Capital One.