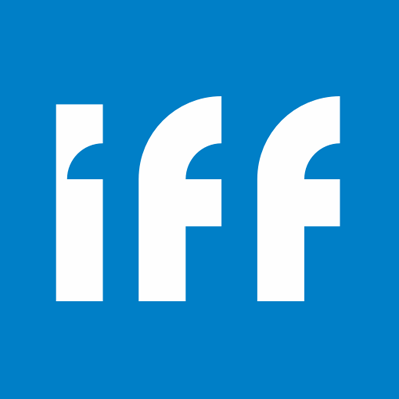 International Flavors & Fragrances is an American corporation that produces flavors, fragrances, and cosmetic actives, which it markets globally. It is headquartered in New York City and has creative, sales, and manufacturing facilities in 47 different countries. The company is a member of the S&P 500 Index.

P&S during World War II. While both companies managed flavors and fragrances, Polak & Schwarz had particular strengths in flavors and van Ameringen-Haebler built a powerful reputation in fragrances. In 1958, the two companies announced their merger to become International Flavors & Fragrances Inc. IFF was listed on the New York Stock Exchange in 1964. It was cross listed to the Euronext Paris Market in 2015, becoming the first US-listed company to make use of Euronext Paris Fast Path process.

In 1968, in conjunction with the Monell Foundation, IFF established the Monell Chemical Senses Center, dedicated to the research of taste and smell.

In 1985, Dr. Braja D. Mookherjee, a scientist at IFF, pioneered Living Flower technology, which changed the way perfumes are created. In 1990, IFF broke ground in their R&D facility located in Union Beach, NJ, to develop its 5,000-square-foot greenhouse and botanical garden, which can maintain tropical and subtropical temperature zones for more than 1,300 varieties of exotic plants.

It is home to a miniature rose called "Overnight Scentsation" (also known as the "Space Rose") which was cultivated for experiments in space and left the Earth during a 10-day flight on board the shuttle Discovery (STS-95) in 1998. Low gravity critically altered the fragrance of the rose, which was later commercialized by IFF and Shiseido.

Henry G. Walter, Jr., former IFF Chairman, 1962–1985, was a noted philanthropist and prolific writer, who pioneered the field of aromatherapy. He is considered one of the most influential people in the Industry. It has been speculated that he inspired some of the storylines and characters in the book Masters of Sex by Thomas Maier, as well as the Showtime series by the same the name. During World War II, his wife, Rosalind (Palmer) Walter worked on the night shift as a riveter on the Corsair, the F4U Marine gull-winged, fighter airplane, inspiring the song "Rosie the Riveter."

In 2000, IFF acquired Laboratoire Monique Rémy based in Grasse, France and forms IFF LMR Naturals, strengthening its position in the development and use of raw materials, natural ingredients for fragrances and flavors. In 2000, IFF acquired Bush Boake Allen with its complementary products, technologies, and presence in key markets, making IFF the largest flavor and fragrance house in the world for several years.

In 2014, IFF acquired Aromor Flavors and Fragrances Ltd., a privately held manufacturer and marketer of complex specialty ingredients that are used in fragrances and flavors, founded in 1982 and based in Israel in Kibbutz Givat Oz.

In 2015, IFF announced that it completed the acquisition of Ottens Flavors. This was followed in 2016 with the acquisition of David Michael & Company. Using this merger as a catalyst, they have since launched Tastepoint by IFF to serve dynamic middle-tier customers.

In 2015, IFF acquired Lucas Meyer Cosmetics, a cosmetic actives firm based in Canada that develops, manufactures and markets innovative ingredients for the cosmetic and personal care industry.

In 2017, IFF completed the acquisition of Fragrance Resources, a privately-held, family-owned fragrance company founded in 1987 by Horst F. W. Gerberding.

On June 26, 2017, IFF launched Tastepoint by IFF – a new company designed to service the middle-market customer in North America. Tastepoint by IFF represents the merger of David Michael & Co. and Ottens Flavors.

On May 8, 2018, IFF acquired the Israeli company Frutarom for $7.1 Billion, a company established by Yehuda Araten and Maurice Gerzon, two industrialists from the Netherlands in 1933.

IFF has 247 manufacturing facilities, "creative centers" and application laboratories located in 47 different countries, with a product portfolio covers taste, scent and complementary adjacent products, and over 128,000 individual products that are provided to customers in approximately 200 countries.

On December 15, 2019, IFF entered into definitive agreements with DuPont de Nemours, Inc. (“DuPont”), including an Agreement and Plan of Merger, pursuant to which DuPont will transfer its nutrition and biosciences business to Nutrition & Biosciences, Inc., a Delaware corporation and wholly owned subsidiary of DuPont and Nutrition & Biosciences, Inc., will merge with and into a wholly owned subsidiary of IFF.

Sales in 2020 were approximately $5.1 billion, making IFF the second largest company in the taste, scent, nutrition and specialty ingredient industry during the period. Based on 2020 sales, approximately 35% were global consumer products companies and approximately 65% were small and mid-sized companies.The business is geographically diverse, with sales in the U.S. representing approximately 20% of sales in 2020. No other country represented more than 6% of sales.

In 2020, IFF operated across two segments: Taste and Scent. As a result of the Nutrition & Biosciences Transaction, the business is now organized in four business segments: Nourish (a combination of IFF’s Taste business with N&B’s Food & Beverage business), Scent, Health & Biosciences and Pharma Solutions.