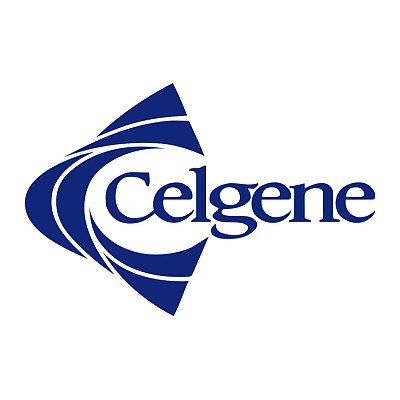 Celgene Corporation is a pharmaceutical company that makes cancer and immunology drugs. Its major product is Revlimid (lenalidomide), which is used in the treatment of multiple myeloma, and also in certain anemias. The company is incorporated in Delaware, headquartered in Summit, New Jersey, and a subsidiary of Bristol Myers Squibb (BMS).

Celgene was originally a unit of Celanese. In 1986, Celanese completed the corporate spin-off of Celgene following the merger of Celanese with American Hoechst.

In November 2011, Celgene relocated its United Kingdom headquarters from Windsor, Berkshire, to Stockley Park, near Heathrow airport which is also the home of GlaxoSmithKline's UK operations.

In January 2012, Celgene agreed to acquire Avila Therapeutics, Inc., a privately held biotechnology company for $925 million, with $350 million in cash.

Citing a market capitalization of US$67 billion, and stock appreciation of 107%, Celgene was Forbes Magazine's number 2 ranked drug company of 2013.

In 2014, Celgene and OncoMed Pharmaceuticals joined a cancer stem cell therapeutic development agreement with demcizumab and five other biologics from OncoMed's pipeline. That same year, Sutro Biopharma entered into an agreement with Celgene Corporation to discover and develop multispecific antibodies and antibody drug conjugates (ADCs). This followed the December 2012 collaboration between the two companies and focused on the field of immuno-oncology.

In April 2015, Celgene announced a collaboration with AstraZeneca, worth $450 million, to study their Phase III immuno-oncology drug candidate MEDI4736.

That same month, Celgene announced it would acquire Quanticel for up to $485 million in order to enhance its cancer drug pipeline. Celgene had invested in Quanticel in April 2011.

In June 2015, Celgene announced it had licensed Lyceras RORgamma agonist portfolio for up to $105 million to develop its Phase I lead compound LYC-30937 for the treatment of inflammatory bowel disease. The licensing opportunity gave Celgene the option to acquire Lycera.

In July 2015, the company announced it would acquire Receptos for $7.2 billion in a move to strengthen the company's inflammation and immunology areas.

In May 2016, the company announced it would launch partnership with Agios Pharmaceuticals, developing metabolic immuno-oncology therapies.

In January 2017, the company announced it would acquire Delinia for $775 million, increasing the company's autoimmune disease therapy offerings.

In January 2018, Celgene announced it would acquire Impact Biomedicines for $7 billion, adding fedratinib, a kinase inhibitor with potential to treat myelofibrosis.

Also in January 2018, the company announced it would acquire Juno Therapeutics for $9 billion.

In January 2019, the company announced it would be acquired by Bristol-Myers Squibb for $74 billion ($95 billion including debt), a deal that would become the largest pharmaceutical company acquisition ever. Celgene shareholders would receive one BMY share as well as $50 in cash for each Celgene share held, valuing Celgene at $102.43 a share; representing a 54% premium to the previous days closing price. The activist investor Starboard Value LP opposed the deal, nominating five alternative potential directors on the Bristol-Myers board. The deal was approved by shareholders in April 2019.

In August 2019, Amgen announced it would acquire the Otezla drug programme from Celgene for $13.4 billion, as part of Celgene and Bristol-Myers Squibb's. The Bristol-Myers acquisition closed on November 20, 2019.

The following is an illustration of the company's major mergers and acquisitions and historical predecessors (this is not a comprehensive list):

Celgene (Spun off from Celanese in 1986, acquired by Bristol-Myers Squibb in 2019)

For the fiscal year 2017, Celgene reported earnings of US$2.539 billion, with an annual revenue of US$13.003 billion, an increase of 15.8% over the previous fiscal cycle. Celgene's shares traded at over $74 per share, and its market capitalization was valued at over US$51.8 billion in November 2018.

As of 2019, Celgene focused on oncology and immunology. Cancer drugs include Revlimid (lenalidomide) and Pomalyst (pomalidomide) and the immunology drug Otezla (apremilast) accounted for around 90% of the company's total revenue as of 2019.

In July 1998, Celgene received approval from the FDA to market Thalomid for the acute treatment of the cutaneous manifestations of moderate to severe ENL.

In December 2005, Celgene received approval from the FDA to market Revlimid for the treatment of patients with transfusion-dependent anemia due to Low- or Intermediate-1-risk MDS associated with a deletion 5q cytogenetic abnormality with or without additional cytogenetic abnormalities. Focalin XR was later launched by Celgene and Novartis in 2005.

In May 2006, Celgene received approval for Thalomid in combination with dexamethasone for the treatment of patients with newly diagnosed multiple myeloma.

In June 2007, Celgene received full marketing authorization for Revlimid in combination with dexamethasone as a treatment for patients with multiple myeloma who have received at least one prior therapy by the European Commission.

Celgene denied that it had behaved anti-competitively, arguing that the legislative history strongly suggested that Congress considered and rejected a proposed guaranteed access procedure like the one proposed by Dr. Reddy's. Celgene further argued that requiring innovator companies to sell their products to potential generic competitors would violate its intellectual property rights and subject it to liability risks in the event that patients were harmed in Dr. Reddy's studies.

In 2018, Celgene was at the top of a list of companies that the FDA identified as refusing to release samples to competitors to create generics.

Generic manufacturer Lannett Company initiated antitrust litigation that accused Celgene of using its REMS for THALOMID (thalidomide) to violate the anti-monopolization provisions of the Sherman Act. In early 2011, the district court denied Celgene's motion to dismiss. The case was set for trial beginning in February 2012, but the parties settled before the trial began, thereby postponing further judicial review of antitrust claims premised on alleged abuse of REMS distribution restrictions.

In July 2017, Celgene agreed to pay $280 million to government agencies to settle allegations that it caused the submission of false claims or fraudulent claims for non-reimbursable uses of its drugs Revlimid and Thalomid to Medicare and state Medicaid programs. In its July 2017 10-Q, Celgene disclosed that it resolved the matter in full for $315 million, including fees and expenses. The case was brought under the False Claims Act by Beverly Brown, a former Celgene sales representative.