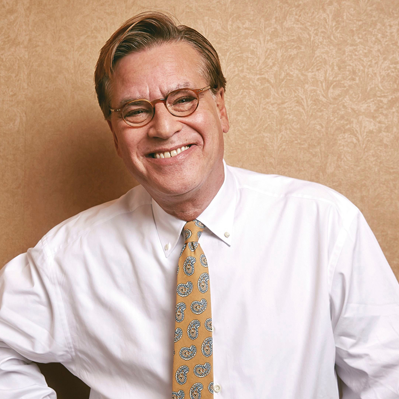 Aaron Benjamin Sorkin is an American playwright, screenwriter, actor, television writer, television producer, and film director. Born in New York City, Sorkin developed a passion for writing at an early age. His works include the Broadway plays A Few Good Men, The Farnsworth Invention, and To Kill a Mockingbird, as well as the television series Sports Night (1998–2000), The West Wing (1999–2006), Studio 60 on the Sunset Strip (2006–07), and The Newsroom (2012–14). He wrote the film screenplay for the legal drama A Few Good Men (1992), the comedy The American President (1995), and several biopics including Charlie Wilson's War (2007), Moneyball (2011), and Steve Jobs (2015). For writing 2010's The Social Network, he won an Academy Award for Best Adapted Screenplay and Golden Globe Award for Best Screenplay.

He made his feature film debut as a director in 2017 with the crime drama Molly's Game, which garnered mostly positive reviews and earned him a third Academy Award nomination for Best Adapted Screenplay. Sorkin's follow up directorial film was the historical legal drama The Trial of the Chicago 7 (2020) which earned 6 Academy Award nominations including Best Original Screenplay. As a writer, Sorkin is recognized for his trademark fast-paced dialogue and extended monologues, complemented by frequent collaborator Thomas Schlamme's storytelling technique called the "walk and talk". These sequences consist of single tracking shots of long duration involving multiple characters engaging in conversation as they move through the set; characters enter and exit the conversation as the shot continues without any cuts.

Sorkin was born in Manhattan, New York City, to a Jewish family, and was raised in the New York suburb of Scarsdale. His mother was a schoolteacher and his father a copyright lawyer who had fought in WWII and put himself through college on the G.I. Bill; both his older sister and brother went on to become lawyers. His paternal grandfather was one of the founders of the International Ladies' Garment Workers' Union (ILGWU). Sorkin took an early interest in acting. During childhood, his parents took him to the theatre to see shows such as Who's Afraid of Virginia Woolf? and That Championship Season.

Sorkin attended Scarsdale High School where he became involved in the drama and theatre club. In the eighth grade, he played General Bullmoose in the musical Li'l Abner. At Scarsdale High, he served as vice president of the drama club in his junior and senior years, and graduated in 1979.

In 1979, Sorkin attended Syracuse University. In his freshman year, he failed a class that was a core requirement, which caused a setback because he wanted to be an actor, and the drama department did not allow students to take the stage until they completed the core classes. Determined to do better, he returned for his sophomore year, and graduated in 1983 with a Bachelor of Fine Arts degree in Musical Theatre. Recalling the influence of theatre teacher Arthur Storch, Sorkin said: "Arthur's reputation as a director, and as a disciple of Lee Strasberg, was a big reason why a lot of us went to S.U. 'You have the capacity to be so much better than you are', he started saying to me in September of my senior year. He was still saying it in May. On the last day of classes, he said it again, and I said, 'How?', and he answered, 'Dare to fail'. I've been coming through on his admonition ever since".

Sorkin married Julia Bingham in 1996 and divorced in 2005, with his workaholic habits and drug abuse reported to be a partial cause. Sorkin and Bingham have one daughter, Roxy. He dated Kristin Chenoweth for several years, who played Annabeth Schott on The West Wing (after Sorkin had left the show). He has also reportedly dated columnist Maureen Dowd and actress Kristin Davis.

A consistent supporter of the Democratic Party, Sorkin has made substantial political campaign contributions to candidates between 1999 and 2011, according to CampaignMoney.com. During the 2004 US presidential election campaign, the liberal advocacy group MoveOn's political action committee enlisted Sorkin and Rob Reiner to create one of their anti-Bush campaign advertisements. In August 2008, Sorkin was involved in a Generation Obama event at the Fine Arts Theater in Beverly Hills, California, participating in a panel discussion subsequent to a screening of Frank Capra's Mr. Smith Goes to Washington. However, Sorkin does not consider himself a political activist: "I've met political activists, and they're for real. I've never marched anyplace or done anything that takes more effort than writing a check in terms of activism". In 2016, after President Donald Trump won the election, Sorkin wrote an open letter to his daughter Roxy and her mother Julia.

In 1987, Sorkin started using marijuana and cocaine. He said the drug gave him relief from certain nervous tensions that occur on a regular basis. In 1995, he sought rehabilitation at the Hazelden Institute in Minnesota, on the advice of Bingham to combat his addiction. In early 2001, Sorkin and his colleagues John Spencer and Martin Sheen received the Phoenix Rising Award for overcoming their drug abuse. However, on April 15, 2001, Sorkin was arrested when security guards at Hollywood Burbank Airport found hallucinogenic mushrooms, marijuana, and crack cocaine in his carry-on bag, and a metal crack pipe was detected by a magnetometer. He was court-ordered to a drug diversion program, while still working on The West Wing. In a commencement speech for Syracuse University on May 13, 2012, Sorkin said he has not used cocaine for eleven years.